The Ascent of Geeko Sapiens - or Maybe Geeko Neanderthalis 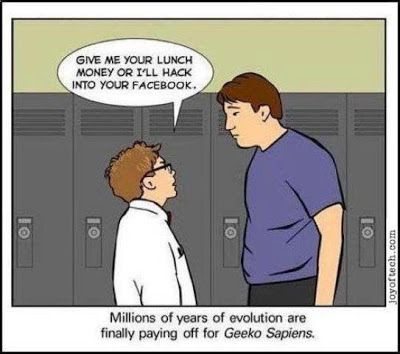 One of the more interesting and to some degree amusing concepts that I have encountered on the Internet is the belief that some people have a lot of Neanderthal ancestry...and then there are the Cro-Magnons.

According to believers, the Neanderthals are the intelligent, creative, sensitive introverts, and the Cro-Magnons are the destructive extroverted simpletons who fuck up everything. They are the ones who start wars, imitate each other, and are incapable of rational and abstract thought, and have no imagination. The worst of stupid extroverts become cogs in a machine, like the identical stormtroopers in Star Wars.

The first time I ran across this concept was in John Norman's novel, Time Slave.


Two people are transported back in time to the Cro-Magnon era, and find that the Neanderthals call themselves "the Love People." ('"What is the name of your people?" asked Hamilton. Swiftly Ugly Girl made the signs. "The Love People," she said, in the hand talk of certain of the human groups.')

The late Stan Gooch was the first than I know of who basically said that everything good people have, they got from Neanderthal ancestry. Scientists denied for years we have any Neanderthal genes, but recently genetics has gotten so advanced it turns out non-African populations have anywhere from one percent to four percent Neanderthal DNA. I find it interesting since Africans are stuck in about 50,000 B.C.

Thom Hartman took a different tack, claiming there are some people who are "Hunters in a Farmer's World," and you can recognize them by such traits as having ADD. Not surprisingly, Gooch claimed the same thing, as do sites such as Koanic Soul.

People would not have come up with this split if it did not exist. There are people out there who are intelligent, imaginative and creative. These are the people who advance society. These people are almost always introverts.

Then there are the people who destroy. They are almost always extroverts. The low-IQ ones end up in prison and the high-IQ ones become politicians.

I once read that people like Bill Gates and Warren Buffett used their wealth to insulate themselves from the retarded. I conclude both are introverts, as I am (I have known my brain was wired differently since I was 12, although I didn't think "wired differently"; I thought, "Who are these dumbasses?").

There is something going on here, and I'm not quite sure what it is. I do know some people look at the negative things in society, analyze them, and notice (I will repeat this) how many things have been messed up by extroverts, i.e., they fill up prisons and make up almost all politicians. They're the people who lack analytic ability and abstract thought (which is why they imitate each other) so they come up with simple-minded (i.e., wrong) solutions that usually involve their perverted and dangerous ideas about patriotism and religion. So smart people sometimes conclude these knuckleheads are a different species.

But I do know there are people out there, introverted, intelligent, creative, imaginative, who would just as soon live in the country, away from the hustle and bustle. Sometimes they are able to get away. If they can't, they often live in their imaginations.

As always, only time will tell. More discovery and investigation is needed, then sooner or later the truth will come out.

There is certainly is something about the neanderthals. They had art, music, and buried their dead with gifts at a time that Homo Sapiens where either eating their dead or tossing their rotting bodies into the tribal trash heap.