"Virgins? All that you can use." 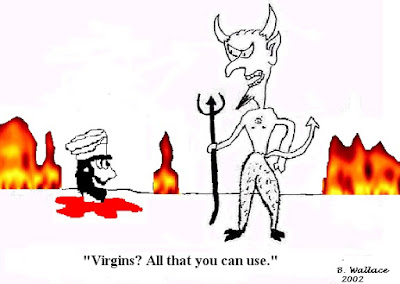 I drew this cartoon a few months after 9-11, when I discovered Muslims believed there would be 72 virgins waiting for them in the afterlife.

I remember thinking at that time that none of these suicide bombers would end up being good-looking, popular men. They would be the outcasts and rejects, the kind who were very unpopular with women. So why not go to meet all your virgins? You've got nothing here.

Sure enough, a few years ago, if not longer, I ran across a study that expressed just that belief - that suicide bombers are overwhelming losers who were utterly unpopular with women.

If works over there that way, so why not here?

All the mass shootings over here are done by young men who are hopeless with women. Indeed, hopeless in life.

The first one I am familiar with it Charles Guiteau, who killed President James Garfield. Guiteau had lived at a free love commune called Oneida and the women did want anything to do with him. That called him Charles Get Out.

As for the spate of recent shootings, all of them involved mentally-ill young men, on psychiatric medication, humiliated behind belief, who decided to get revenge and replace shame with pride by blowing away a bunch of people.

It's not just the mental illness and medication, although these days the medication appears to be a trigger for the violence. But Guiteau wasn't on medication (it didn't exist) and neither was George Sodini, who killed a bunch of women at a gym since women had been rejecting him all his life.

What all have in common is revenge and resentment. Of feeling humiliated and rejected.

Something I noticed decades ago is that some women seem to think they have the right to abuse men, but of course nothing of the sort is supposed to be done to them. There's not all that many of them, but enough to be very noticeable.

Is this an American thing? I don't know, but I have not seen that attitude among the foreign women I've met.

I'll say this: we are going to see more of these revenge shootings. It's as if there is something wrong with our culture that creates these crazed men.

Well, it's not explicitly written as virgins, even not that it would be 72 of them. It's just a Muslim "urban legend" of yore:
https://en.wikipedia.org/wiki/Houri

A couple years back the moslem mongrels drew international condemnation because they had started using retards for suicide bombers. The problem with that was intuitively obvious to anyone with white skin and a triple digit IQ - retards and bombs are a very bad combination! One retard bomber went off on the Palestinian side of a check point and I still remember the footage - the retard was just one long string of bloody meat and the tracked robots were poking and picking at him and remotely monitoring what was left! HAR HAR HAR! Such was the Palestinkian foray into smart weapon platforms!

Awhile back some femcnut was beaking off about how white males should be banned from owning guns because of all the mass murders. She shut up when some wag noted that all of the perps were raised by powerful, capable and independent single mothers. Perhaps single motherhood should be banned too...?

I don't see a connection between moslem mayhem and the domestic brand. Islam is a blood cult and the guys that flew the planes through the towers were not crazed or emotionally disturbed the way some of our homegrown types are. A lot of those raghead bombers are warriors on a suicide mission in the name of something they believe in.