Exactly How do You Define the Free Market? 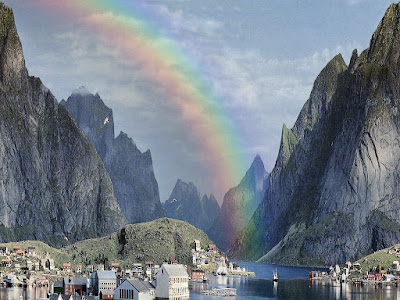 This picture, as far as I know, is of a village in Norway. Amazing, isn't? You'd like to live there, wouldn't you? I'd be there like a shot.

I have for decades wondered how exactly you define the free market (bear with me about how it relates to that wonderful picture).

The free market is generally defined as minimal government interference (I dismiss open borders anarchist libertarians as complete and utter fools with zero experience dealing with low-IQ, impulsive, criminally-minded Third World trash, the kind who fill our prisons. These naive supporters are the the kind of anti-American leftists who have elevated their ideologies to the status of religion, to replace the God they no longer believe in. They also belong to the deluded "I Fucking Love Science" crowd, the kind of nuts who think their misunderstandings of "evolution" explains everything).

The United States was founded on the belief in the government protecting "life, liberty and property." That belief pretty much came from John Locke, although most of it came from Christianity, on which the West was founded (look up Jonathan Mayhew sometime, who was referred to in his time as a "transcendent genius" and who came up with the concept of "no taxation without representation"), and who wrote that no one had to obey a government that disobeyed Natural Law.

Let's take suburbs. Are they free market? No. The government, a long time ago, set up the laws to encourage middle-class suburbs. That's not "free market," but so what? The government was supporting the people.

I have met "homeless" people who preferred to be hoboes (look up what that really means) and who've told me they lived their lives as they did because they were free of everything (although, to be accurate, there is a fine line between eccentricity and mental illness).

But not everyone wants to live in suburbs and some people despise them. They'd rather live in that village in the picture.

The government at one time encouraged the middle class, which is the backbone of the United States. The "poor" are quite often parasite trash who think they are supposed to be supported by everyone, and the uberweathy "one percent" are also parasites, whose wealth comes from laws which take from everyone to give to them.

The only "class" that matters are the middle class.

Why do we not have villages like this in the U.S.? (Forget the fjords, because they're not the point. The hills do matter, though.) The government has never encouraged such beautiful little villages.

Something that has stuck me for decades is what you could call "Nordic Socialism" (it wouldn't work in the U.S., not with all those low-IQ, criminal Africans, Muslims, Mexican and other South Americans).

This "socialism" only works in high-IQ, high-trust societies which are small, homogeneous and populated by high-IQ whites. Norway, Finland, Sweden, Iceland.

Iceland has a little over 300,000 people and is populated by people like me. I've lived in cities with more people than live in Iceland! And yet it is an advanced society.

Why is Haiti not like Iceland? All of Africa? The entire Arab Muslim world? We know the reason, although some try to deny it (think of Jared Diamond's deluded Guns, Germs and Steel).

The picture is of a village in a high-IQ, high-trust community, and all of us know perfectly well everyone there is a high-IQ white. Africans, Muslims and Mexicans could not build such a village and couldn't maintain it, either.

The more Third Worlders we let into U.S. the less free market we're going to have, the more government oppression (what the late Sam Francis called "anarcho-tyranny") and the more communities such as the one above will cease to exist, replaced by East St. Louis and Detroit (while whites retreat to mountains, to look down on the criminal masses below).

Whites always take to the hills, while the genetically inferior mob the valleys (think Elyisum, in which whites move to space stations and leave the Earth to the Third Worlders).

I hope to God that village does not take in Third Worlders. It would cease to exist.

It's clear the "free market" of people moving where they want does not work. It's been a castrophe of rape, murder, muggings and other crimes.

"(look up Jonathan Mayhew sometime, who was referred to in his time as a 'transcendent genius' and who came up with the concept of 'no taxation without representation'), and who wrote that no one had to obey a government that disobeyed Natural Law."
So, which is it? You can't have both "taxation" AND obedience to Natural Law. If it doesn't violate Natural Law, it can't be "taxation", with or without "representation", which is an absurd concept anyway- no one can represent another without an explicit agreement between the two individuals, which never exists with government.

As for/against the need for explicit agreements, read about the free rider problem. It's not in the interest of a free rider to bind oneself with a contract, as long as free-riding is more advantageous.

"Representation might be interpreted that way, but that would be misinterpreting it, since it doesn't work like that at all.

I know all about "free riders" and see them as a great excuse for people scared of liberty.

Personally, I prefer the Germanic countries over the Scandinavian/nordic countries:

Vienna is the best city in the world to live in: London, Paris and New York don't make top 35 as German-speaking cities dominate quality of life rankings

In the "mainstream" of public discussion, this cannot be spoken of.

It seems you have become an illiterate when it comes to economics. Extolling the virtues of a system that has literally sucked the life out of its citizenry, emasculated its men and androginized its womenfolk. Whether you like it or not, in spite their beauty, the Nordic countries are failed countries where, despite their high average IQ, have contributed very few to the human advancement, in comparison with the rest of Europe. By the way I am not a libertarian (even though I share many of their tenets) I would call myself economic nationalist, as simple as that, free market within the nation, self interest über alles when it comes to foreign trade.