“Everything to be imagined is an image of truth.” - William Blake

I've always been intrigued by imagination, since it's one of my strong suits. When I was 12 and 13 years old I'd get so lost in a novel I wouldn't hear anyone if they called my name. And if I did hear sometimes I ignored it since I resented the interruption.

Years later I realized that anything that can be imagined is an image of truth. Imagine my surprise when I realize William wrote the same thing hundreds of years ago.

If the writer is good enough to create a fully realized world, and readers imaginative enough to suspend their disbelief, they can temporarily become absorbed in that Secondary World, and in a sense, "live" in it. If people can become absorbed enough in a Secondary World, it can be for a while more real than the real world (and as I wrote, I know about that). Such is the power of imagination.

Sometimes Secondary Worlds are good places in which to live, and sometimes they are not. The unhinged Karl Marx created his own private Secondary World. When it was implemented in the Primary World, the result was perhaps the most hellish catastrophe humanity has known. That shows us the power of the (blasphemous) Word made Flesh. Or, as Richard Weaver wrote in his famous book of the same title, Ideas Have Consequences. It also shows us that imagination is not a trivial thing, something to be smiled at and suited only for children.

One of the curious things about the difference between the Primary World and Secondary Worlds is that the first one is inherently imperfect, or to use a religious term, "fallen." Secondary Worlds aren't necessarily fallen, although most are in various degrees. But they are often more ideal than the real world, which is a good thing, because it allows the reader to imagine what a better world might be like.

A libertarian/classical liberal world, for example, is as close to an ideal world as there can be. However, being an ideal world, it doesn't exist totally in the real world. It does exist in bits and pieces in reality. But in many ways it is a Secondary World, one that people are always trying to implement in the Primary World.

How does one learn about worlds of political and economic liberty? By reading writers who try to fully realize those worlds. Alternate universes, if you will. That's one of the things Ludwig von Mises and Murray Rothbard did: they spent their lives imagining fully-realized free worlds, and wrote about them in the hope others would read of them and be convinced of the truth of their positions.

As an aside, I've always amazed that words, or a picture, or an idea, can shoot from person's head into another's - and the receiver understands it! How is this possible?

See that painting? It's John Waterhouse's "Lady of Shallot." You know what she's feeling. Did did that painting do that? How did you do it? 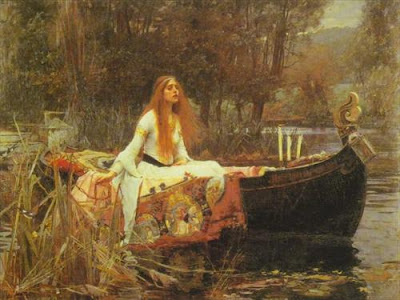 As Richard Feynman so perceptively noted, "...there are new generations born every day...there are great ideas developed in the history of man, and these ideas do not last unless they are passed purposely and clearly from generation to generation."

The difference between the Secondary World of someone like Marx, and those of Mises and Rothbard, is that the latter two had some understanding of human nature and economics, which is why their worlds, made real, would be an infinitely better place than Marx's.

If what is imagined conforms to reality, the effects can be world-changing for the better. Einstein imagined what it would be like to ride a beam of light. His imaginative discovery forever changed the 20th century. Perhaps that saying, "The truth shall set you free" means what it says.

A few hundred years before, Adam Smith imagined what his economic theories would be like in reality. His resulting book, The Wealth of Nations, also changed the world forever. Both Einstein and Smith vividly imagined their worlds, so much so in Smith's case that while walking at night, absorbed in thought, he at least once fell into a ditch.

For some reason which I don't quite understand, science-fiction, fantasy and horror writers tend toward the anarchist/libertarian side. The greatest writers, such as Dostoevsky and Joseph Conrad, tilted toward conservatism, although they weren't at all fond of government. The worst writers, like Marx and the Marquis de Sade (who was one of the founders of leftism) are almost exclusively leftist. There is a lesson in that somewhere. We can learn from Erik von Kuehnelt-Leddihn’s Leftism Revisited: "Madness is very often a combination of cold reason and fantasy severed from all reality."

Nearly every libertarian-tilting person I know has been profoundly influenced by the late Robert Heinlein. His The Moon is a Harsh Mistress, about a libertarian society on the moon, is often mentioned by them. I was very much influenced at the age of 13 by A.E. van Vogt's The Weapon Shops of Isher, which illustrated the importance of the Second Amendment in defending liberty against the tyranny of the State (“The Right to Buy Weapons is the Right to be Free”). Others I know were equally affected by Eric Frank Russell's ...And Then There Were None, about a society which had discovered a fool-proof way to defend itself against invaders.

Van Vogt showed me a fully-realized world, and after finishing the novel, I knew the State cannot be trusted, will always try to oppress people, and that people must always be armed to protect their liberty. I clearly saw in my imagination what van Vogt's Secondary World would look like in reality. I was never the same after reading him. Or H.G. Wells. Or Theodore Sturgeon. Or Edgar Rice Burroughs.

Some of these science-fictional Secondary Worlds are very good -- sometimes great places to visit. Peter S. Beagle, understanding this, once made the comment he would go to Middle Earth "like a shot." Visiting such worlds, for some people, makes them understand what the word "gratitude" truly means.

Instead of having to stumble around for years from book to book, idea to idea, wondering what is true and what is not (and not finding it in the vast wasteland of the public schools, including college), all one has to do is read one good novel about a fully-realized world, and the truth of it cannot be denied. Perhaps one might not agree with everything in it, but one will not go away from such books unaffected.

The writer Vernor Vinge, for example, said of L Neil Smith’s The Probability Broach: "Contained ideas I wish could be shouted to the world, ideas that come from the American heritage of freedom and which could bring still greater individual liberty, greater technical progress." I've never seen anyone say this about a college economics text. Or any college textbook.

One of the first things I was told in the first journalism class I took was “Show, don’t tell.” That is the problem with textbooks: they tell, but they don’t show. It’s not a problem with good fiction. It’s because people understand stories…not lectures.