"Nobody Loves Me - Guess I'll be a Suffragette" 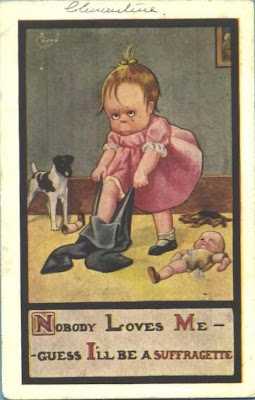 My first year in college, when I was 18 years old, I had a class in which there was the first feminist I had met. She was overweight and unattractive, and was a little bit too loud and a little bit too hostile.

It occurred to me she was a feminist because she was overweight and unattractive. Perhaps if she had lost the weight, dressed better and put on some make-up she would have looked a lot better and been more popular. But she wasn't going to do that.

It is a cliche that many feminists are unattractive. Like all cliches there is truth to it. Notice, for example, the little girl in the picture is not attractive and is mean-looking - or maybe just sad-looking. She's also torn the leg off of her doll, which you can interpret as "Since I'm not going to get married and have husband, home and children I don't want them." And she's putting on pants. And isn't that a tear in her left eye?

The dog still loves her, though (it should be a cat or three).

A picture is worth a thousand words.

Perhaps unattractive women should get free plastic surgery. After all, there is another cliche with a lot of truth in it: An Ounce of Prevention is Worth a Pound of Cure.

Nobody Loves Me - Guess I'll get a job in human resources.