The Balance Between Inbreeding and Outbreeding 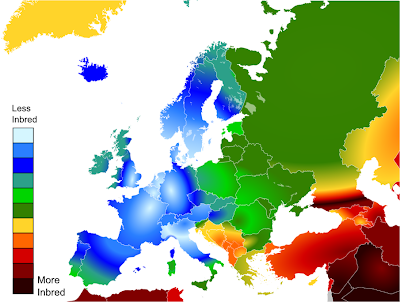 I cannot remember where I got this map from, but the light areas show outbreeding and the darkest ones show the most inbreeding.

I find it very interesting because of this map: 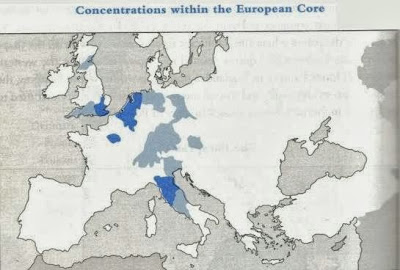 This map is from Charles Murray's Human Accomplishment, in which he found 98% of all the discoveries in the world came from Europe and its descendents in the rest of the world. When I saw the top map the lower map immediately sprang to mind.

Even more interesting, Murray found that those accomplishments were concentrated in certain areas of Europe. If you compare those two maps, you'll see some intriguing things.

I find this astonishing.

It didn't occur to me until recently that in those days most people couldn't travel that much. I recently got on a plane and flew over 1000 miles in about four hours. In the past, you couldn't travel any faster than the fastest horse.

None of this, of course, means indiscriminate outbreeding. Sub-Saharan Africa, for example, has produced nothing of any value. India, Asia, South America and the Middle East put together contributed only contributed about two percent.

I've read several times that about 50% of what we are is inherited. The rest is environmental. If this is true (and I think it is) then we should be very careful about whom we have children with.

HBD Chick is an entire blog devoted to this sort of thing.

I think I got that map from one of her links, but I can longer find it. Damn. I'd like to attribute it.

"we should be very careful about whom we have children with ..."

An understated admonition and 100% correct!

I have a friend who's Lebanese. Very Lebanese--straight off the boat dabke hugs and kisses you kind of Lebanese. Born and grew up in one of their tiny villages in the hills and fought for the Maronite Christian militia. He's a very big, strong guy and so is his brother. They are giants by Levantine standards. I asked him why they were so big and he told me "Nobody from my village ever marries anybody in our village. We are all big."

The map was drawn by me, and can be seen here:

How Inbred are Europeans? | JayMan's Blog

Also, the blue to white areas on this map describe the populations with the most Neanderthal DNA. It's not just that we're not inbred cousin-fuckers. It's that we're the least Cro-Mag.

I have come to the same conclusion about Cro-Mags and Neanderthals. Non-African populations have one to four percent DNA and Africans have none unless they picked it up from white ancestry.

This map is worthless actually.

From the creator:
"This is a map of our current best guess of the rates of historic inbreeding across Europe and parts of the Near East. This map is a guestimate, and is not derived from direct measurements. However, it visualizes what areas we think are the most and least inbred, based on these regions’ histories and other pieces of evidence we have"

Do you have any clue what any of the means? Yep, I'm sure a thorough examination of 'regional history' went into it, at the very least!

When you superimpose that map over the accomplishments of Europe, it's far from worthless.

I ban idiots. You're banned.

With whom we have children with?

Well, in times of degenerate sex-obsessed loonies teaching to live in sexual decadence, _any_ eugenic consideration went out of the window.

I am genetic trash and would kill myself were I not a Christian. I support eugenics just like Chris Langan does; or Galton, Pearson, Hans F. K. Günther.

Eugenics appals those who fear its judgment.

Although it grieves the angelism of the democrat: one cannot build a civilisation with miserable biological material.

The two most pressing problems of the contemporary world: demographic expansion and genetic deterioration are unsolvable.
Liberal principles prevent the solution of the first, egalitarian ones that of the second

No beneficiary of slaves is supporter of birth control.