What Happens When You Inject the Marijuanas 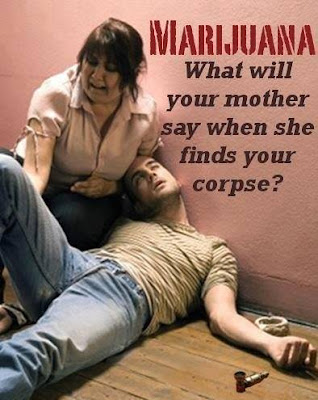 When marijuana was made illegal in the early 20th century, the group that made the biggest protest were doctors. They knew it was a pain-killer, a muscle relaxant, and that it induced sleep and increased appetite. And there were no side effects. Anyone whose brain wasn't completely closed, the way a bureaucrat and/or politician is, knew it never should have been illegal.

Some years ago I slipped on a wet ramp and hit the ground at what felt like one hundred miles an hour. I was okay until I got up the next morning. I almost couldn't walk.

I went to a friend's house and explained the situation. We smoked a pea-sized bit.

The pain went away. It didn't go away completely, but I'd say 80% of it. And I could walk with very little pain. As I said, a muscle relaxer and a pain killer. I fell asleep with no problem that night, and woke up just fine. Maybe it has healing properties, too. These days, there are researchers investing these things.

I saw Reefer Madness at the drive-in when I was 19, with my girlfriend. I had spent my teenage years getting high on the weekends, and I knew the film was bullshit from beginning to end. Even then I thought, how can anyone not seen through the film?

It what happens when people believe government propaganda. I, on the other hand, believe nothing the government says. Never.

I lived in New Mexico for several years. The girlfriend of one friend had a surgeon operate on her for back pain and he messed her up bad. Turned out he had messed up a lot of people, including professional athletes whose careers he put to an end.

She was in constant pain and went from one addictive opiate to another - prescribed ones. She actually became an addict.

Finally, tired of her merry-go-round, she got on the medical marijuana program. The pain went away. Her muscles relaxed. She slept less, because the opiates made her sleep all the time.

There are cannibinoid receptors in our brain, along with opiate and hallucinogenic ones. That means our bodies produce our own natural chemicals that mimic those "drugs." If we didn't have those receptors, the ones we ingest could not affect us.

Great points. Attitudes about pot are antiquated and based on mostly disinformation.

Pushing pot and self medication with it is a non-starter, Bob. There is little scientific evidence to support it - and what little there is - is countered by the clinically documented health risks. Nor are my freedoms infringed because kids can't smoke it. Having said that - I know recreational users and they do just fine with it. I won't touch it, I have far better things to do with my time and money.

The reason pot is illegal is that the state can't regulate it. I don't care what the pot heads say - any idiot can grow this stuff in his basement and if you place the taxes on pot the way it is done with tobacco and booze - that is just what he will do!

Further, pot will cut into tobacco and booze markets which the state DOES control - and that would seriously hurt their taxation revenues.

Another reason, the state won't re-legalize it is forfeiture laws and many prisons are privately owned & profit based.