Look at the Big Brain on Bob 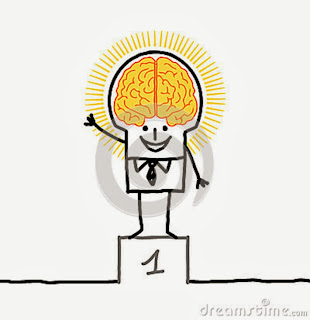 Unfortunately my brain is pretty big, because I have a huge head (I have problems with hats). One girlfriend told me it was the size of a computer monitor, and another, when she saw a picture of me at six months old, wondered how my mother gave birth without exploding. I think of that famous scene in Alien. Or the birth scene in that classic horror film, It's Alive.

Worse (for other people but not for me), I'm an introvert. It's not like I'm 100% (impossible) but I almost always come up 60% introvert, 40% extrovert. I'm a Big-Headed Introvert, which isn't all that much of a good thing, not when I have to deal with Pin-Headed Extroverts (PHEs), whom I strongly suspect are the cause of most of the problems in the world. They certainly have caused a lot of problems for me.

Both extroverts and introverts can be creative, but being an introvert I am far more familiar with the kind I possess.

We have a lot of:

And need a lot of:


“The more powerful and original a mind, the more it will incline towards the religion of solitude.” ~ Aldous Huxley.


I consider our schools to be a catastrophe when it comes to introverts. I got the distinct impression that public schools were unwittingly trying to kill me. Dav Pilkey, who writes children's book, said he was stuck in the hallway as punishment. The dumbass teachers didn't realize that is exactly where he wanted to be, so he could write and draw to his heart's content. Not surprisingly, when I was stuck in the hallway, I much preferred it to being in class. My entire nervous system calmed down just sitting there by myself. (The same thing happens to me outside, say sitting in a park.)


"Talent is nurtured in solitude … A creation of importance can only be produced when its author isolates himself, it is a child of solitude.” ~ Johann Wolfgang Von Göethe


My report cards (which I still have) had notes on them that I wasn't paying attention, not doing my homework, and "not fulfilling my potential." So I've decided that if public school have to exist they are strictly for the Pinheads and not for the Big-Headed Introverts.

Big-Headed Introverts don't belong in school. If anything, they should have mentors with whom they can wander outside looking at ants and tadpoles and being told about them. If only I could have been raised like that. I was, in a way, because I used to wander around my myself on weekends just looking at things.

It's now clear that introverts have different brains that extroverts. For one thing, we have more blood flow to our brains and we are more sensitive to dopamine. It's one of the reasons there are so many extroverts on anti-depressants, which don't have much effect on introverts.

Since the Big-Headed Introverts possess such imagination and concentration, they are responsible for an extraordinary number of inventions and discoveries. Adam Smith, who pretty much founded economics, was the classic imaginative introvert whose study was strewn with books and papers, and when he went for walks at night to think and imagine, once fell into a ditch. I've come close to that myself.


“The mind is sharper and keener in seclusion and uninterrupted solitude. Originality thrives in seclusion free of outside influences beating upon us to cripple the creative mind. Be alone — that is the secret of invention: be alone, that is when ideas are born.” ~ Nikola Tesla


The rationalization for public schools is that they "socialize" kids. In the case of the Big-Headed Introvert I can guarantee you that is not true. For them, it's more like being traumatized.

Since the public schools are unfortunately not going anywhere soon, the only advice I can offer is that if your kid is smart and introverted, pull him or her out of them pronto. Homeschool them.

If you have a child who has to be alone at times, who reads and has a strong imagination, who does not like school (and would rather party with his friends on the weekends, as I did), pay attention to what your child is telling you.

I would rather live in a rural trailer with my kids and homeschool them than take a chance having their lives ruined by putting them in public schools.


“… practically all creative people, and certainly most geniuses, have preferred to be alone for long periods, especially when producing their best work.” ~ Raj Persaud, One Hundred Tears of Solitude

School wrecked me. In kindergarten I recognized that I was smarter than the teachers, much less the other kids. I was punished for experimenting in grade school. Teachers would brush off my questions as silly, because they either didn't know the answer or couldn't grasp my inquiry.

The only way to remedy the situation is to get government out of schools. So, ya know, wait for the whole rickety structure to come crashing down. Hopefully, a significant number of our tribesmen will survive the calamity I expect.

I don't know, Unc. I've taken the MB test four times (formally) for various employers and always my score was 100% introvert (INTJ was my overall profile each time).

By 7th grade, school had nothing more to offer me. I learned much more from reading independently in areas of interest, and from the 2 or 3 teachers who gave me material that interested me. I am not as materially successful as my peers, but I suspect I am happier: married, children, terribly attracted to my husband, and living with little day to day stressful thought aside from whether or not I have the time to pickle the cucumbers or make sauce from tomatoes.

Perhaps I should be putting my brainpower into more than such decisions, but I never liked the corporate structure and didn't thrive there. Maybe those people will have prettier cars or shoes and handbags than I will. Sleeping well at night is worth far more than an Hermes purse.

I keep coming up INTJ, too. Every time.

I am not interested in the corporate rat race. I dropped out years ago.

School was a catastrophe starting in middle school. I didn't expect it to be a hell, but it was.

I should have dropped out when I was 12 years old.

You've written about Farmer Boy on more than one occasion. Of the nine volume set of Laura Ingalls Wilder's books I had as a child (I've since added several of her volumes of poetry and magazine submissions to my anthology of her work), Farmer Boy continues to be one of my all-time favorite pieces of American literature.

To this day, my dream is to live on a self-sufficient farm such as the Wilder's had. My father grew up not far from Malone, NY. When I was a child, he took me to visit the Malone homestead (it has been a landmark for some time). He read the book with me, over and over and over, and reminisced on his own Upstate NY childhood and it's overlap with the book. The self-sufficiency and high educational attainment of the Wilder (and Ingalls) children, despite access to institutions of higher education, fills me with derision. Derision that our systems have become so complex as to bring themselves right back to the basic and immovable structure from which they first sought to progress. Derision that we have become so haughty as to think we no longer have need of the collected wisdom of the Christendom that made us and instead seek other gods and knowledge because exoticism trumps familiarity.