Wages Stopped Going Up In January, 1973

"We’ve been drowning in a flood of low-wage jobs for the last 40 years." - Peter Edelman 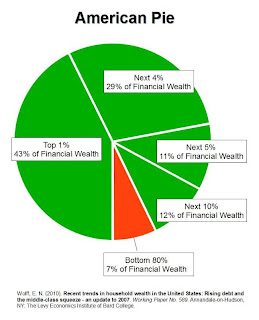 There are several reasons why yearly income stopped going up in 1973, but they all have one thing in common - the growth of government.

I own my own business. What Hanauer says is true: hiring people is based on the demand for your - my - product. At the beginning I absolutely could not hire anyone, and I worked 70 hours a week for six months. After that I was able to hire two people to meet the demand for my product.

Things would have been a lot easier if taxes had been a lot lower - taxes on gas, for example, since transportation costs were a large cost of my business.

So crushing taxes are a big part of the problem. The super-rich can get out of paying any but minimal taxes. I couldn't.

Affirmative Action ("White Men Need Not Apply") is another part of the problem. I've seen this a dozen times just in my life, with my friends. Economies don't grow unless there is value added to it, and putting unqualified women and unqualified minorities in jobs were they have to be supported by men is not adding value to the economy.

The Federal Reserve Bank. Need I say more? Since its creation the dollar has lost about 98% of its value.

In 1973 Nixon (who people think was a conservative but was a liberal) went off of the gold standard, allowing the Federal Reserve Bank to inflate without any brakes on it.

Corporations. I call them Cosmodemonic Transnational Megacorporations, and anyone who thinks they a good thing or free market doesn't have a clue. Mussolini referred to Fascism as "Corporatism" and he was exactly right.

Corporations are creations of the State, and have the legal status of persons. The Fathers hated them and Jefferson wanted put in the Constitution a clause forbidding their creation (he called them "the moneyed interests"). They ultimately take over the government, which has pretty much happened today.

Those who extoll the wonders of McDonalds and Wal-Mart as "free market" don't have a clue as to the fact they are two of the biggest tax money parasites in the world.

The only class that matters is the middle class. The very rich are always parasites, as are the deserving poor - the lazy who try to spend generations on welfare/crime.

And in all of history, the only thing that creates the middle class is the free market, which in the U.S. is going away. And what will left is the mega-rich, a tiny middle class, and lots of poor using drugs, drinking, and watching TV. Bread and circuses.

In January of 1973, the growth of government finally got big enough to start crushing the economy. Until the government shrinks by about 75% things aren't going to get any bigger.

Ultimately it will shrink. It'll collapse, actually, has has ever government in the past. And it's always because it got too big.

And when it does, people will pick themselves up, as they always do, dust themselves off, and rebuild. And maybe, this time, there won't be any democracy (which always destroys, then collapses) and when politicians lie, cheat, steal and murder, they'll cut their heads off and stick them on poles as warnings to others.


“We fought a war on poverty and poverty won.” - Ronald Reagan

Nixon ended the convertibilty of dollars to gold in August, 1971. There was about a 2 year lag before things began to go south in 1973...

Isn't that interesting? I've noticed that, too.

I agree with you on the corporate angle. There were some bad Supreme Court decisions or interpretations on this issues over the years. There was also a time in this country when those in charge of corporations were also held accountable for poor actions.

But what about private companies like Koch holdings and such? They probably have laws that help them as well.

The Kochs aren't a corporation? If not, I'm sure, as rich as they are, they use the State to enrich themselves.

I've heard some pretty bad stories about those guys.