Maslow's Hierarchy of Needs Isn't All That's It's Supposed To Be 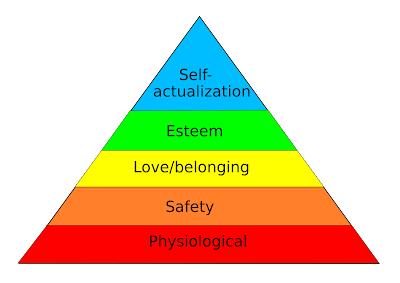 I learned about Maslow's Hierarchy of Needs in college and didn't give it much thought (I was 18). It appeared to be useful, and in some ways it is. I know it's very popular and have even had it presented in various training sessions.

But when I started thinking about it I found it was full of problems.

For one thing, is self-actualization the same for a man as for a woman? Many women - but not all - want home, husband and children to be happy. Men appear to want more independence and to be more of a protector and provider. At their best they discover, invent, create, innovate.

Either way, everyone wants community, meaning, and importance in their lives. Without those things you basically have nothing. Where are those things in that hierarchy? They aren't there.

The Manosphere has a truly bizarre hierarchy that has little to do with reality. Think of that Greek alphabet soup of Alpha/Beta/Gamma Omega. Apparently "self-actualized" is supposed to be an "Alpha. Unfortunately the commonly-accepted definition is a narcissist/psychopath - that dangerous nonsense of the "Dark Triad." It sounds close to the nutcase "Ayn Rand"'s aloof, psychopathic supermen in her novels The Fountainhead and Atlas Shrugged.

This article is from Psychology Today and was written by Pamela Rutledge.


Maslow’s hierarchy of needs model, developed in 1948, resonates across many disciplines, from business, technology and education to its field of origin, psychology. It speaks to potential and to positive conceptualizations of human motivation. As popular and widely applied as this model has been, however, insights from the use and adoption of social technologies like Facebook and Twitter, combined with increased knowledge about brains and networks, show that our understanding of Maslow’s model misses the mark in a very fundamental way. It doesn’t give enough credit to the role of social connection.

Maslow’s hierarchy of needs captivates us because it brings a sense of order to the chaos of human behavior. Psychologists, educators, parents, and marketers have been trying to figure out what influences behavior for a long time. In contrast to the behaviorist’s carrot and stick, both widely employed and frequently discredited, Maslow’s hierarchy has a nice sensible structure that makes intuitive sense. Maslow’s model, as its name suggests, organizes groups of human needs into levels in a hierarchical structure, forming a pyramid. It’s similar in some senses to video games in that you have to fulfill the requirements of one set of needs before you can level up.

But the same things that make Maslow’s model cognitively appealing — that sense of order and predictability — also makes it wrong. If only life were so simple.

The human brain is driven by a basic instinct to survive. This need trumps all others. Thus it’s easy to see how obvious biological and physiological needs, such as food, drink, shelter, warmth, and sex, formed the basis of Maslow’s pyramid.

As Maslow’s hierarchy continues, the second level is made up of the safety needs, such as protection, security, order, limits, stability, and predictability. The third level is where Maslow’s model placed the belongingness needs like family, affection, relationships, work groups, and community. The fourth level is what we might consider more the ego-centric needs of achievement, relationships, responsibility, and reputation. And finally, at the top is self-actualization, or the desire for personal growth and fulfillment.

But here’s the problem with Maslow’s hierarchy. None of these needs — starting with basic survival on up — are possible without social connection and collaboration.

None of Maslow’s needs can be met without social connection

Humans are social animals for good reason. Without collaboration, there is no survival. It was not possible to defeat a Woolley Mammoth, build a secure structure, or care for children while hunting without a team effort. It’s more true now than then. Our reliance on each other grows as societies became more complex, interconnected, and specialized. Connection is a prerequisite for survival, physically and emotionally. 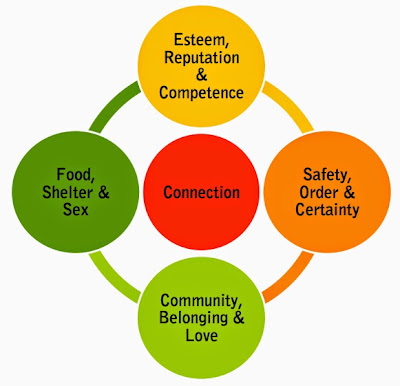 Needs are not hierarchical. Life is messier than that. Needs are, like most other things in nature, an interactive, dynamic system, but they are anchored in our ability to make social connections.

Maslow's model needs rewiring so it matches our brains. Belongingness is the driving force of human behavior, not a third tier activity. The system of human needs from bottom to top, shelter, safety,sex, leadership, community, competence and trust, are dependent on our ability to connect with others. Belonging to a community provides the sense of security and agency that makes our brains happy and helps keep us safe.

From the Savannah to Facebook, social behaviors adapt to the environment to support that most basic of human needs. We strive to achieve it within the technological constraints of our environment.

As such, observed behavior is not necessarily reflective of what we are unconsciously driven to do to satisfy our needs. I was a teenager in the period before social networks AND cell phones. My friends and I had to borrow the car from our parents to go out. It was much easier to borrow a car on the weekends than a week night for a host of reasons. If, however, you were a social scientist observing behavior without being privy to local culture and parent-teen negotiations, you might assume that in my town, teens preferred to go out on the weekends. If you did so, you would be making an attribution error, assigning motivation or preference to what was simply a lack of technology (wheels, in this case).

Therefore, what we observe across society may not reflect the underlying motivations. On the other hand, when we do see ‘new’ behavior, it is most likely the empowerment of goals, not the creation of them. Facebook and Twitter did not cause the Arab Spring. But social technologies did connect people in a way that inspired them to act on existing motivations and goals.

When we look at the rapid innovation and ubiquitous nature of technology, our reptilian brains get nervous with all the change. In the face of uncertainty, we ask the wrong question. We ask ‘what does technology do to us?’ The question we should ask is “what can we do with technology?”

Social behavior maps to human survival. Social networks allow us to see, as never before, the interrelated nature of society and the palpable development of social capital from the emerging and intricate patterns of interpersonal relationships and collaboration. The strength of our networks and our bonds improve our agency and effectiveness in the environment. Our need for survival through connection plays out through every successful social technology.

Collaboration and teamwork allow us control our environment
Reciprocal and trusting relationships create effective collaboration
Social comparison establishes organizational structure, leadership and order
Social validation and social identity maintain emotional engagement and enhance attachment to our mates and our group
Competence contributes to the survival of our group and our sense of security and safetlockquoy

If we look at the last decade of social technologies, we are not seeing anything fundamentally new. People have not changed. We still have the same old tripartite brain with its reptilian drives. Facebook may not bear much resemblance to huddling around a campfire, but, in spite of moral panics to the contrary, its function is the same.

Technology is a tool, nothing more. It is a facilitator of human goals. Social technologies have opened the floodgates to new ways to pursue existing motivations and objectives in ways that are increasing our sense of agency. It doesn't change what we want to do, but like with the car, we can get there a lot faster. We should not be surprised nor resist the rapid adoption of tools that enable one of our most basic survival instincts: connection.

Plus individuals have varying requirements for each need. I think your diagram captures it in a more elemental manner.