"Can You Make Me a Sandwich?"

“All government, in its essence, is a conspiracy against the superior man: its one permanent object is to oppress him and cripple him." - H.L. Mencken 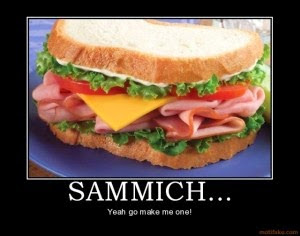 I have found that asking women to make me a sandwich is a good way to judge their character. I've asked women to make me sandwiches and some have thrown fits. Others quite willingly do so, and in fact enjoy it.

The last one who threw a fit is unmarried, never will be, and not is not only without husband, is also without children and home. Just an apartment and a high-paying make-work "career." She is not happy.

The shortest and best description I have encountered about the difference between men and women is the Taoist one: "Yang protects Yin and Yin nurtures Yang." Women are supposed to nurture and support men,

I once met a married woman, decades ago, who told me when her husband got home from his blue-collar job, she had a hot bath waiting for him and a hot dinner. She told me she enjoyed doing this.

I also know a woman who told me her idea of play is to cook, clean and knit. And she's far from stupid.

Many men and women today have lost their way. The government has a lot of do with it. Feminism (which is leftist) could have never taken root without the State enforcing it. Because "equal."

If the government had stayed out of interfering in relationships, things would be a hell of a lot better. Man could still be providers and protectors and women could be supporters and nurturers.

My experience has been women are far more lost than men.

"I have found that asking women to make me a sandwich is a good way to judge their character."

Same here. I used to be on the look out for signs of trouble from a woman. If they said anything along the lines of "strong/empowered", "I don't need no man", or "I'm an independent woman" they were shown the door. This was because they ALWAYS translated to "I'm a ball busting shrew who won't be supportive for any man because they're "strong/empowered" after all. By contrast however, these same special little snowflakes had no problem demanding that prospective men wait on them hand and foot, the royal princesses they are.

The dim bulbs of the manosphere love to babble on about unpleasant, shitty behaviour like it's a "shit test", but they never speak of "shit testing" the women as mentioned in this post, but will whine like a landwhale that got cut off from the all you can eat buffet that women can't cook etc. The real issue is not that they can't, it's that they won't. The solution to that is to cancel them.

I believe that "shit tests" are just bad behavior by rude women.

If a woman likes a man, her interest will be obvious and she will encourage him.

The problem is most of these guys in the manosphere propagating these stupid ideas really have no success with women and do not really understand them. They never had a girl really like them so they have no reference point of what behavior indicates real female interest. They think: "Gee, she just insulted and rejected me, so she must really like me, I need to be clever, amusing, a smart ass, in response to her, etc." - No, Idiot, she really doesn't like you, and she is also being rude and anti-social.

'My experience has been women are far more lost than men.'

I'd say both have their share of being lost but for different reasons.

Women forgo relationships for career and men forgo discipline for hedonism. This ruins both parties.

Of course women have a 24/7 message of career for many years now and the manosphere has only recently come on to tout the 'wonders' of hedonism.

'No, Idiot, she really doesn't like you, and she is also being rude and anti-social.'

Yeah being rude, sarcastic, and mean is not proper social behavior for men or women.

If the rats want to play their game...let them. It isn't a great strategy for life though.

Anon, I think that females start to mature at an earlier age, but for some reason, a lot of them stop the process in their twenties. Men take longer, but seem to keep going - wise old man territory.

These ladies that shit test, remind me of myself when I was 7. If I really likes a girl, I would run up to her, punch her, then run away.

"If the government had stayed out of interfering in relationships, things would be a hell of a lot better. Man could still be providers and protectors and women could be supporters and nurturers."

I agree, but it's not like private companies had a problem with undercutting husbands by hiring wives, either. They talked nicely about feminism because it doubled their workforce and lowered their labor costs. What women used to do for their families or society is now done badly or not at all. That's privatizing profits and socializing costs, maybe the biggest example of it. What started out as feminism and equality is now about economic survival. Once the culture is broken and the stigma is gone, whatever the government does is almost secondary. Anglo/germanic nations also just seem to be very good at producing manly women.

Here's one thing that I've discovered about women. How you ask or request her for something is at least as important as what you request or ask her for, if not more so. If you simply say something like "I had to put in overtime and I'm wiped out. I'll bet you make a good sandwich, would you fix me one?" It worked every time I saw or said it.

Everyone knows it's spelled "sammich" not "sandwich.