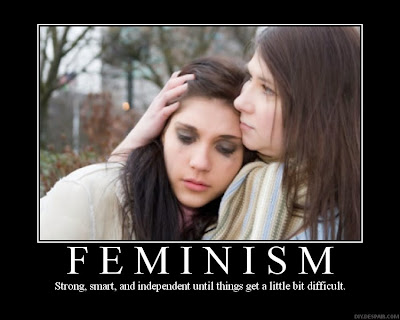 In college I spent about six months as a security guard (which these days are called watchmen). Later I became a security officer, which required training in those collapsible metal batons, Mace, firearms and handcuffs. I carried all of them. Technically I was a private police officer and now there are more of them than police officers.

I ended up working downtown nights in a big crime-ridden city, and this is why I am sympathetic to good cops and have no use for the bad ones.

I noticed something interesting things. When things go bad, women run straight to a man, including those Strong Independent Empowered Women, who don't exist. Yet some of then run and run and run their mouths, thinking somehow they are immune from the world. Or they can somehow handle themselves. Talk about deluded!

The military, police officers, security officers - and all the rest - protect those who cannot protect themselves, and that basically includes all women. Yet while some women are grateful, many are not.

I've mentioned before I've had white women, black women and Asian women run to me for help, mostly about getting their car started, or changing a tire, or getting it out of the snow. My friends and I did these things with no complaint or no expectation of payment.

Yet I nearly and nearly every other man have been abused by women, often, in my case, straight out of the blue. Did they have no idea what I could do to them if I so wished, and they could be nothing about it? What are they going to do? Call the police and explain what happened while spitting blood through their broken teeth?

Many women today are pampered and deluded. Not all, but enough to be noticeable. And no matter how deluded they are, when things get tough, they'll turn straight to a man.

My policy is to help kids and elderly of either gender and men of any age. Women between the ages of 15 and 60 are on their own.

When I was in college I worked as a bouncer and had women do some wacky things. One of them scratched up her face badly when I wouldn't let her in the club because she was badly intoxicated and said she'd call the police on me. I said go ahead, they'll take samples of what's under my fingertips and not find your DNA and see that thing over there, that's a camera. She made a scene and finally went away. Several things like that any of which could have gone badly for me without witnesses or cameras.

A friend had a girl throw herself out of his car and said he pushed her out and he would have been in trouble had one of the responding cops not known the girl, it was a a small town with only 4 cops, and known she'd done this before.

Ungrateful women, and many men, act/think all men have an obligation to help any and all women but this generation of young men is baked in by now, and many of them don't give a shit. The next generation will care even less, and so on, and so on...

It's quit possible that you could face criminal prosecution by not rendering aid to a women in distress. For example not involving yourself in a domestic dispute or other violent attack.

No women has any obligation to come to your aid.

I have very few legal obligations to help anyone, most especially if it puts me in danger. On the other hand, when I was a security officer I had to help any cop who requested help. Had I not done so, I would have lost my license and been fired. Even if it my put life in danger I was legally required to help if they requested it.

YMMV, although you are probably right that there can be no reasonable expectation that you put yourself in mortal danger, professional obligations aside. For now anyway.

"It's quit possible that you could face criminal prosecution by not rendering aid to a women in distress. For example not involving yourself in a domestic dispute or other violent attack."

>The Supremes have already determined that police officers have no duty to protect you, the citizen, so how can they impose that duty on someone with even less of a cause to intervene, such as your average citizen?

I only mentioned it as a possibility. They have no reasonable cause. When has that ever stopped them?

A dude in Colorado said...

I have been lurking for quite some time now, but finally feel compelled to comment.

I don't agree with everything you write - just about 90% of it, lol. There is too much truth here to not take a look now and then.

This piece is spot-on.

"...I've mentioned before I've had white women, black women and Asian women run to me for help, mostly about getting their car started, or changing a tire, or getting it out of the snow. My friends and I did these things with no complaint or no expectation of payment."

Out of curiosity -- how many of these women (say, percentage-wise) even THANKED you?

Due to women's toxic and ungrateful attitudes, I don't offer assistance to a woman if I'm not related to her or I don't know her. She can call 911 as easily as I can.
And only a fool or idiot gets involved in domestic disputes that don't involve you.

Instinct is interesting to watch. I've observed that too: something bad starts and women's heads start swiveling and looking for their man.

OT, I once bought these rawhide strips (first and last time) and gave them to my dogs and went and sat down on the couch. One of my dogs was in my peripheral vision and she suddenly stopped chewing and headed straight to me. I reached down her throat with my fingers and pulled out that rawhide.

For the record I wasn't advocating getting involved in other peoples business -regardless of risk.

These lousy bitches have destroyed the social contract, the social compact really. What else can they do except double-down? They can't force you to care or involve yourself, but maybe they they can fuck you up after the fact.

All the women did thank me, but it was mystifying to see them head straight for a man when things got just a little bit hard.