Judging a Person by Their Head

Some years ago I ran across a guy who was swarthy, hairy and had a forehead about two inches high. At first I thought the hair just grew that low on his forehead, but when I looked more closely he literally had no forehead.

He was an okay guy but dumber than a rock. He had zero intellectual interests.

It was because he literally had no frontal lobes. The more I thought about it the more I realized you can judge a book by its cover - people by their head and face.

A person with a very high forehead has traditionally been called an egghead. I use Richard Feynman as an example.

Low forehead - dumb. High forehead -smart. It's more complicated than that, though.

Some people have foreheads that slope backwards. To me that means "incapable of abstract thought." The first time I saw that was on Lynndie England, the chinless, sloping-forehead soldier who went to prison for her idiotic poses and tormenting of Afghan detainees. 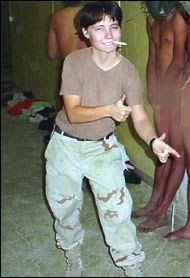 This female was clearly unable to tell the difference between right and wrong.

I have also seen this sloping forehead on most black people, who are responsible for a disproportionate amount of crime. I've also seen it on a lot of MMA fighters.

Then we have beady little eyes, which has always meant untrustworthy and backstabbing. Who is a well-known politician who has those? George "Shrub" Bush. He also has a little bit of a sloping forehead. Not that much, but it's there.

Clearly the man has problems - and he showed what he is by starting two unnecessary wars, killing hundreds of thousands of innocent people, devastating America's economy, and taking away some of American's freedoms.

I also knew a conniving, backstabber who had shifty eyes - his eyes would shift back and forth as he was thinking of way to screw you.

Then there is the back of the head. A few days ago I was standing in a coffee shop when I saw a young man, married, whose wife was pushing their kid in a stroller. Not only did he have a sloping forehead, the back of his head was completely flat. He looked like a nice guy but not all that smart.

The back of the head is where your occipital lobes are, which deal with vision. I don't know what a flat back of the head means as compared to having a round skull in back (which I do) but I intuitively suspect a Flat Head is not all that good of a thing.

Many years ago I was at a gun show where one of Hitler's tailor-made uniforms was on sale for $20,000. I was shocked at Hitler's build - short and frail with a very thin chest. I've heard him - and Nietzsche, for that matter - referred to as "pencil-necked," i.e., the head was too big to be supported by a frail body and too-thin neck.

The Greek ideal was the neck, biceps and calves being the same circumference. Why? Maybe their experience showed that a proportional body showed a healthy mind.

My head is actually quite large - one girlfriend said it was the size of a computer monitor. But I am not frail - my neck and biceps and calves are same size.

I can't say the same for a professor one of my friends told me about. He said he looked like an ant - enormous head, pencil neck. He also said the guy didn't have much sense - lived in an intellectual fantasy world pretty much divorced from reality. He's the kind I refer to as "high-IQ idiots."

I suspect an intelligent, imaginative person would have a high forehead and a round back of the head. Their body would be in proportion to the head. I also suspect they wouldn't be swarthy and excessively hairy, either. And definitely not have beady little eyes.

With only a few exceptions, stereotypes come into being for a reason. Finding that a stereotype is true to at least the 80% level should not be a surprise. Finding that one isn't would be the surprise.