Conspiracists are Ghouls and Vampires

"The art of magic is the art of tricking the human brain into constructing a false narrative of reality." -Mencius Moldbug


I've always dismissed conspiracists as narcissistic fools who divide everyone into "Me good; you bad." I was more amused by their delusions than anything else.

When I say "conspiracists" I don't mean three people getting together to kill Jimmy Hoffa. I mean the nuts who think everything is a conspiracy. They are the kinds of people who cherry-pick the "facts," make some up, then put them together into a mangled story that no one with any analytical ability - or even common sense - could accept.

However, I now think these people are ghouls and vampires. Why? Because they feed on death and destruction and misery. Without it, they couldn't conjure their lunatic beliefs. What would they do with themselves without catastrophes to give meaning to their tedious lives?

Here's take this picture as an example of just how sick are the souls of conspiracists. 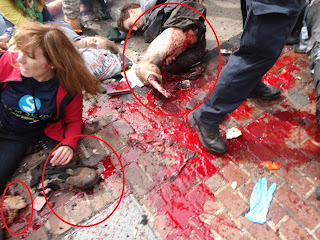 This is the runner in the Boston Marathon who had his legs blown off.

The conspiracists think this is a fake picture. They claim that the leg bone sticking out of the guy is fake and that it fell off while he was being taken away in a wheelchair. A woman who claimed this in a video was laughing the entire time.

They think the entire picture is staged. In other words, everyone in this picture is an actor. When the bomb went off, everyone lay down, threw fake blood around, and moaned and groaned and put on their act.

Imagine if that man without his legs is your son, or the woman is your daughter. Now imagine some conspiracist walking up to you and saying, "Admit it. Your son lost his legs a long time ago and is being paid to put on this act. How much was he paid? Did you get paid, too?"

How would you feel almost losing your son and knowing his legs are gone? And some demented, morally blind conspiracist accuses you and him of faking the whole thing?

And if you're a conspiracist wouldn't you suddenly cease to be a conspiracist? At least when it happens to you and your own? Think of the cognitive dissonance you'd suffer! It'd hurt, wouldn't it?

The only thing conspiracists can do is impose already-manufactured beliefs on reality. They don't have the imagination and empathy to put themselves in the place of those they abuse and insult. After all, those they attack are evil people who've done awful things, so they deserve whatever happens to them, right?

Conspiracists' brains are playing tricks on them. They see the Truth, refuse to believe it, then create Lies which they find more emotionally satisfying. It's right out of Orwell: Lies are Truth.

I used to wonder why Isaiah condemned believers in conspiracies over 2000 years ago. I now think believing in impossible conspiracies is a sickness of the soul, one that revels in death and destruction and takes sadistic pleasure in mocking the dead and wounded. It's a pathetic condition to be stuck in, and I'm grateful that I'm not.


"Conspiracism is a particular narrative form of scapegoating that frames demonized enemies as part of a vast insidious plot against the common good, while it valorizes the scapegoater as a hero for sounding the alarm." - Berlet and Lyons

You have good insights and it's a pity what happened to those poor pedestrian who got involved in this terrible act. However anyone with an IQ above room temperature knows, by the actions already committed by the U.S. government that THEY ARE THE ONES BEHIND THIS, not some stupid patsies, who were allowed to be here and were already in contact with the fbi.

What you just wrote made no logical sense and is a perfect example of what the author is saying. The argument is peurile. It's no different to saying that the Govt has done evil acts in teh past therefore any evil act should be attributed to the Govt. The gvt is evil, therefore the Govt killed all those women and not Ted Bundy , he is a patsy. Or the ten car pileup on the freeway was caused by the govt because...(smokes another joint or 5)... who isn't to say they aren't evil enough and have the technology to do that. It's irrational magical delusional thinking.