"I think the scariest person in the world is the person with no sense of humor." - Michael J. Fox

So much of life is about play. We see plays. We play music and movies. We play games and cards.

It's because we are neotenous - we show the characteristics of youth throughout our lives. Dogs are wolves, but ones we have bred to be eternally young - all they do is eat, sleep and play. Adult wolves don't play at all.

Insects and reptiles don't play at all, either. But if young humans aren't allowed to play, then they can grow up to show the characteristics of reptiles. Think Ted Bundy and Jeffrey Dahmer.

There are "adult" humans who don't play at all, who are deadly serious. I can't imagine Stalin or Pot Pot or Mao Tse Tung playing. They were deadly serious, which an emphasis on "deadly."

It's those who play who create. Without the playful mood we wouldn't have all the inventions and discoveries we have.

There are those who wish to take play out of life. They wish to turn us into machines - into the Borg.

When I was in school we were allowed to play a lot. We played at recess (is there even recess any more?). We even played in class when there was time (we were allowed to draw war scenes on the back of our papers).

Now we have people trying to take all the play out of life.

Last time I was in my hometown I drove by my grade school. When it was built (probably about 1965) there was a scene on the front of the building in multi-colored pebbles - boys and girls playing. 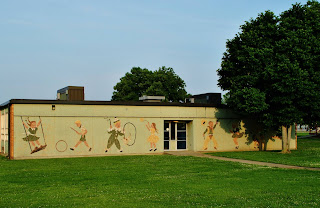 It was removed a few years ago and now is a blank wall. I didn't have to ask why it was removed - "violence" and "safety." Just how goofy is that? Kids will imitate it and murder each other? Or hurt themselves? That's what these lunatics think, the way they think boys playing with toy guns will grow up to start wars (on the right side, out of sight, is playground with all the "dangerous" equipment removed).

The truth is the exact opposite - those who aren't allowed play can grow up to be violent - deadly violent.

We're trying to turn the world into Nerf - to make it completely safe. This is impossible. The side effect of this - the unintended consequence - is to take the fun and play out of life.

Apparently we're now so short on play we have scholars studying it. People such as Start Brown and Peter Gray have devoted their lives to it - and have found without play we lose our creativity and get violent (almost all prisoners were not allowed to play as children).

How did this happen? For one thing, our feminized culture. Women often put safety above freedom - which is why that mural on the front of my former school was removed.

It's a fake safety, though.

Where is this going to lead? Nothing good. The less play, the more unhappy people. The more violence. The less creativity and discovery.

In the long run - and who knows when that will be - we'll have to go back to the way it was. Because if we don't, we're looking at things getting worse and worse.

you would enjoy this book:


Check out this book:

"Play: How it shapes the brain, opens the imagination, and invigorates the soul" by Stuart Brown and Christopher Vaughn.

I had completely forgotten I read that years ago, so I listed it.

Gotta agree. Play is important to many facets of development of the adult. Plus it's fun and relieves tension/anxiety at any age.

"A little nonsense now and then is valued by the wisest men."

When I was a kid, there was this forested area right across the street from where we lived that my friends and I practically lived in, at least during the summer. When the street lights came on, it was time to go home. It was nice.

I don't see this anymore. And yeah, I think it is a problem that kids are not allowed to play out in the open, on their own, any more.

That, and how the schools are trying to make boys into girls, up to and including psych meds, and you have a toxic brew for unhappy kids, not to mention the occasional school shooting.


"That, and how the schools are trying to make boys into girls, ..."

This has been going on for a long time. See this book:

"The Feminized Male: Classrooms, White Collars, and the Decline of Manliness." by Patricia Cayo Sexton, published in 1969.

Besides the cowboy kid with the pistol, the girls are wearing dresses and it's just a depiction of a bunch of white kids, anyway. That's 3 major no-nos. All the stuff the US hates was on that wall. I wonder if anyone even bothered to argue when they decided to take it down.

My hometown is all-white and I'm sure it was removed because of the lunatic belief kids
would imitate those characters and get hurt. As I said, the playground on right has had all the fun stuff removed.