The State as a Machine

"The mass of men serve the state thus, not as men mainly, but as machines, with their bodies...." ~ Henry David Thoreau

"All machines are amplifiers" ~ Cooper's Law

That's a true saying: Machines are amplifiers, amplifiers of our inherent abilities. Machines ae not moral or immoral; they're amoral. They can be used for good or bad.

So the big question is: How can you tell if they are being used for good or bad purposes? To answer this, I look to mythology. Not the old mythologies, but the new ones. Although, to be fair, the new mythologies are just the same old stories retold for modern sensibilities.

One old story, told in a new way, burst on the modern world in the '70s. Everyone knows his name: Darth Vader.

Vader is a modern retelling of the story of Satan, in that his greatest sin is Pride, and he wants to be God and have absolute power over everything, but he's something that Satan or any incarnation of him isn't: he's half man, half machine, a monster who is, as Obi-Wan said, "twisted and evil."

Vader was a representative of the Empire, and everything about the Empire was a soulless machine: the Death Star; the identical Myrmidons known as the stormtroopers, Vader himself. There existed not the slightest evidence of any warmth, or love, or community. Just the will to power. And as Carl Jung noted, you can have either love or power (meaning political power, which is the power to turn a live human into a corpse), but not both. 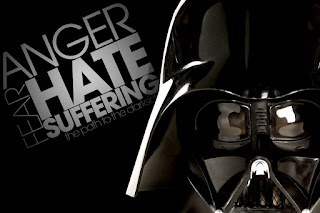 Joseph Campbell said something just as perceptive as Jung but funnier: he called Darth Vader "a bureaucrat," living under a system imposed on him. Vader could strangle people by pointing his finger at them, but he was nonetheless a bureaucrat of the State just as much as a nonentity at the DMV.

Here is a much longer but still very relevant quote from Campbell: "Man should not be in the service of society, society should be in the service of man. When man is in the service of society, you have a monster state, and that's what is threatening the world at this minute. ...Certainly Star Wars has a valid mythological perspective. It shows the state as a machine and asks, 'Is the machine going to crush humanity or serve humanity?' Humanity comes not from the machine but from the heart. What I see in Star Wars is the same problem that Faust gives us: Mephistopheles, the machine man, can provide us with all the means, and is thus likely to determine the aims of life as well. But of course the characteristic of Faust, which makes him eligible to be saved, is that he seeks aims that are not those of the machine. Now, when Luke Skywalker unmasks his father, he is taking off the machine role that the father has played. The father was the uniform. That is power, the state role."

Here's something else to think about: when Like unmasks his father, Vader is grateful.

On the other side, in the second movie, opposing the Empire, the Ewoks were added. They didn't really use many machines, and advanced ones not at all, but they had community. Compare them to the Empire, and it's easy to see the difference between them.

Lucas did this split between the Ewoks and the Empire on purpose. He was using an old theme in literature known as the Machine State versus the Natural State. The Empire is a machine, a monster, really; the Ewoks live a natural, organic life. You can see this same thing in H.G. Wells' The Time Machine, in which the Eloi symbolize the Natural State and the Morlocks (who eat the Eloi) the Machine State.

You need look no farther than modern State militaries, eternally searching for ways to drug soldiers, to remake them so they look and fight like the Borg (also half human, half machine) -- and to what end? To kill, to conquer. (Of course this is rationalized as "bringing freedom" to the benighted of the world.)

The Borg are also representations of the Machine State, people turned into machines, to be used by the State to destroy and conquer. And not surprisingly at all, the Borg Queen complained, "Why do you resist us? We only wish to improve the quality of your lives."

This "improving the quality of your lives" entailed turning people into automatons who had no free will, who never question their leaders because they cannot, not with all those machines screwed into their brains. For all practical purposes, they had no self-consciousness. This unquestioning unconsciousness is, ultimately, what the State wants from nearly everyone. To be sheep who never question, and follow all orders. Since the State does not (yet) have the technology or drugs to pervert us into their desired, obedient machines, right now it has to use propaganda in its attempt to brainwash us into turning into their sacrificial little lambs.

The Borg, in my opinion, are a more accurate representation than the Empire of Star Wars. The Borg Cube is a gigantic womb, and the "people" in it are taken care of womb-to-tomb. Isn't this what the average hypnotized sheeple wants from the State? To never think, to avoid all anxiety, to be taken care of like a baby? They certainly have never heard what Frederick the Great said: "If my soldiers were to begin to think, not one of them would remain in the ranks."

What these people never realize is that the downside of welfare is warfare. Welfare/warfare are opposite sides of the same coin. You won't find one without the other.

You can see this warfare/welfare theme today in the U.S., which unfortunately has turned into an empire. The State is trying to turn the U.S. into Nerfworld while slaughtering foreigners across the globe, in an attempt to turn them into us, i.e., the proto-Borg.

Or, as the Borg broadcast to everyone, "Resistance is futile. You will be assimilated." This will never happen, of course, since people will fight to the death against us. Also, of course, as the old saying tells us, one man's terrorist is another man's freedom fighter.

People also never realize that States try to make everyone the same, so that being equal and identical one can easily be replaced by another, just like a cog in a machine. The loss of an individual life doesn't mean anything. Notice how soldiers came to be called "G.I.s," which means "Government Issue." It's also why all stormtroopers looked exactly alike, and the loss of one Borg meant nil.

When the State uses machines to destroy and kill, it turns into a monster, the way Vader was a monster, or the Borg. And monsters, even in the simplest of children’s fairy tales, are things that always menace good.

I read a fair amount of science fiction, which is the only truly visionary genre. Originally technology was portrayed as not having much of a downside -- a lot of it was like Heinlein's Starship Troopers, although there were exceptions, such as Fred Saberhagen’s Berserkers. But starting pretty much with cyberpunk, suddenly writers were looking very closely at the dark side -- or maybe I should say, the Dark Side -- of technology, until we ended up with The Matrix. But Star Wars preceded all of them.

And in nearly every story in cyberpunk, the State was in some way almost always involved in the badness.

Ezra Pound once called artists "the antenna of the race." You might say the same about schizophrenics, since the paranoid ones often believe machines are controlling them, machines usually operated by agents of the State.

And what these antennae have been saying for the last few decades is: Be very, very careful of what the State does with its machines, because, contrary to the cheers of its deluded supporters, that monster is based on the Will to Power, and will always use those machines to squash you like a bug.

One of your best! I've reposted it here with a nice illustration:
http://ex-army.blogspot.com/2013/03/modern-myths-and-machine.html

Tolkien beat them all to it. It's good you point out the amoral nature of machinery. The myth of the noble savage and an edenic past supports some environmentalists posistions that are just as evil as any technological terror.

Tokien and C.S. Lewis, for that matter.

A few days ago, a Russian woman and I were discussing an article that was published by Harvard and distributed by the New York Times. (But don't let me prejudice you or anything . . . =P) Basically, the author said that executives are responsible for intervening in the lives of their employees, for the sake of the latter's health. He proposed offering healthier food in office cafeterias and giving every office a gym, among other things. The Russian woman was really turned off by this.

"Why would anyone want his boss making the decision about what he should eat and how he should exercise?" she asked, truly baffled why anyone would want to be assimilated by the Borg.

Funny thing is that I've read the LOTR many times - as a boy, as a young man, and more recently as an approaching-middle aged adult.

But I never really grasped this aspect of the theme of creating a collectivist machine with a will to power from the books until I saw the movie and the way Jackson portrayed the orcs being created by Saruman and sent off to marching lockstep in perfectly symmetrical columns, did I really get the insight that Tolkein was using, similar to the Borg and the Empire you discuss here.

The settings and props may change, but the timeless themes always stay the same, don't they?