Make-up Applied With a Paint-Roller

Some years ago, for one day, I met a woman who I estimated was about 58. She was way overdressed and had on way too much make-up. Her own mother told me she was "high maintenance." (I didn't even ask about this woman, who was far too old for me, but the mother just volunteered it for some unknown reason. Sometimes I think people look at my goofy face and figure they can pour their hearts out to me.)

This woman was fairly good-looking for her age, but she turned out to be a secretary who spent a lot of her money on her clothes and make-up to disguise the fact she had passed her prime about 35 years before. She was divorced and lived alone in an apartment. Her mother also told me she often slept in her old room at her parent's house and sometimes cried out in her sleep.

She was a hostile spinster, the kind who hated a lot of men because they didn't meet her "standards," which of course were bullshit.

I've seen this kind of woman before, and I'm seeing more of them every day. 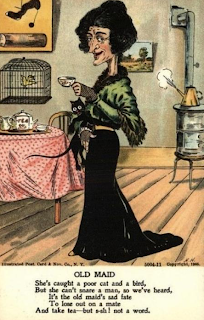 These days whenever I see a woman overdressed with too much make-up I look at her ring finger. Almost always there is not a ring on it, and if there is I assume it'll come off some day.

You can judge a book by its cover. Just imagine an obese woman at Wal-Mart (I know it hurts but you can do it), wearing lime-green stretch-pants. Do you really think her IQ is above 100?

Years ago I was standing outside the garage at a friend's business, when I looked across the street and saw who appeared to be a woman in her 70s....wearing a miniskirt. At least that what I think I saw.

Later I asked some friends who worked there if what I saw what I thought I saw. Yep, the told me, it was a woman in her 70s. She owned the house she was outside of. They also told me she had stabbed her multimillionaire husband to death, put a tiny cut on her arm, and hide in the closet. She claimed an intruder did it.

Oddly enough, she got away with it. I don't know how she did it. But I knew just by looking at her that there had to be something very wrong with her.

I have found that when a woman is overdressed with too much make-up they are always angry at men. Why? I have found they always expect to find a good-looking, materially successful man...and there aren't that many anymore. And when they get too old, they aren't being asked out anymore, which drives them crazy if they were good-looking and popular when younger.

So of course the men are "shallow" and "immature" because they ignore hostile spinsters and sometimes go after younger women...or foreign women.

In a way I consider it just desserts for these women. What goes around comes around. These are the kind who ignored a lot of men when they were younger, ostracizing them because they considered them not good enough for them. Now the tables are turned, and men are ignoring them.

And you know what? I don't feel sorry for them. Not at all.

Where is the like button?
Great observation. I see it as well, even in women in their fifties-as I was reading this post, a woman in her late forties just walked by, and she fits the bill. Overdressed, over made up, and hitched to a decent guy she'll almost certainly divorce.

On the beach one day from a distance I saw a young woman in a bikini with her hair in a high pony tail. With each step closer she got a decade older progressively LOL.

Turns out she was 80! A local high powered business owner who had multiple plastic surgeries. Her image was very important in her field (sales) and she was trying to look 20 something at 80.

Another weird thing is 80 year old male gym rats. Their bodies are wrinkled and "ripped" simultaneously so it gives an illusion and makes one think how old is this guy? But then his face will clearly tell you, especially if he's white or of northern European extraction because they age the worst of all world peoples due to thin skin.


Humans age much more beautifully if they do so naturally and gracefully and wear age appropriate clothing.

Otherwise, with excessive plastic, working out, they just look like genetic mutants.

There's a time for everything. 80 years old is not a time to wear a bikini or spend your days in the gym.

A nice dress and moderate exercise? Sure.

Old Americans need to spend more time with their grandkids instead of trying to look hot and get laid.