Women Should Not be Allowed to Vote

“Carrying on a fantasy of defending the dignity of ladies is absurd in the absence of dignified ladies.” - Matt Parrot

Before women got the vote, many intelligent women did not want them to get it. I ain't surprised that smarter women today want the vote taken from women. When it comes right down to it, women don't like other women, contrary to all the hoo-ha. And the smartest women like men more than women, most of whom they consider snarky, butthurt, and hysterical.

The smarter women in the past thought they had more important things to do than get involved in the cesspool known as politics, such as raising intelligent, educated children instead of tossing them in public schools...which today have been destroyed by female teachers and principals...and the manginas who support them.

I also know another woman who regrets her several lost opportunities with men because of her female-nonsense vegetarianism and anti-gun stance (she once tried to turn her cat into a vegetarian but fortunately gave that up when she saw the cat getting sick). By the time she gave up those things (along with her liberalism in general) she had found she was way past the Wall and was now alone.

All these women I have known, who are natural socialists, operated on the same irrational, fuzzy-minded beliefs: I am supposed to get back ten times more than I give.

I recently met a very intelligent woman who told me she was for national health care. When I asked her if she understood supply and demand, she admitted she did not.

I told her that while the government can control supply, it cannot control demand. It can never control demand. Since under national health care, people will perceive cost as dropping to zero, demand will skyrocket.

Since the government knows this will happen, rationing will happen, because of shortages. Sarah Palin, who understood this, correctly called these rationing bodies “death panels.”

I’m not sure this woman believed me, but when I asked her if she would take a 50% cut in pay to subsidize everyone’s health care, would she do it? She told me “that wouldn’t happen,” which of course was not the question,

I see the same beliefs among women when it comes to not understanding they cannot have a career and children at the same time. “If you quit work, and believe by law that your job should be waiting for you when you come back,” I’ve told them, “do you realize you are forcing your coworkers to cover your job, not get paid for it, and support your with their money if you get pregnancy pay?”

They’ve never looked at it that way, and don’t seem to think it’s unfair until I ask them if they should be forced to take a large pay cut to subsidize other women taking off work for two years to have a kid. They’re not for that because of what I wrote: I should get ten times more than I give.

Socialism is a female thing, even if men believe in it: we should by law be forced to share and do favors for another. We should be happy to do it and not feel resentful. And of course, socialism only works until you run out of other people’s money.

Wages stopped going up in 1973, courtesy of our evil government. Had it stayed out of the free market, I wouldn’t be surprised if the average salary would be $90,000 a year.

I estimate now less than five percent of men can support a family on their own. Yet I still meet women who think they supposed to be supported by men and are in a rage at them this isn’t happening (they’re also in rage when some guy making $75,000 a year is 5’6” and married to an Asian woman, which is what happened to one of my dentists).

Since this support can no longer happen, what these women do is marry the State. They become wards of the State and live on food stamps, in subsidized housing, with a medical card, and aid for their children. A life like this does not get better; it gets worse.

These women rarely realize they are still dependent women: they're just dependent on the government. That's why I said they're married to the State. They are still under a "patriarchy" although they are clueless to this fact. They are oblivious to the fact they expect chivalry from both the State and men...when men get little and sometimes nothing in return.

Overwhelmingly, it's about safety and security (both non-existent) over freedom. As Fred Reed wrote, "Males value freedom over security; women, security over freedom. Men love venturing into the wild, whether in Silicon Valley or unexplored jungles, if any; women do not. Men are fiercely competitive; women, concerned with order and comity. Men are physical, enjoying, even needing, rough sports; women are not. To a man of my generation the country today is unbearably controlled, restricted, safe, and feminized." 'nuf said.

Since men created civilization, and science and technology, the advances in these things will be slowed down and in some ways destroyed, all in the interest of a false "security" wanted by the silliest of women, and the stupid, ignorant men who support them. And again: since men create and provide these things to women, women are dependent on men. They still look up to men, but it's the worst men: politicians. 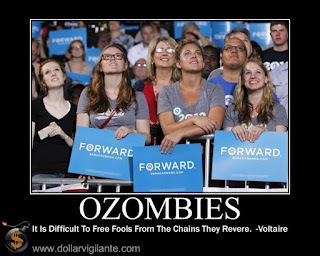 One woman I know quite well believes it is all supposed to be free for her: free food, free utilities, a free apartment, free nice furniture. Of course, she is married to the State.

That’s why women have traditionally been denied the vote. A society run solely by women – a socialist society – would be a destroyed society.

In fairness to teh wimminz, there are a whole lot of men out there who shouldn't be voting either. People who can't even tell you one-tenth of what the President does think they should get to choose who the President is. Seriously.

I am a female and I agree with this 100%... except I understand supply and demand.

Sometimes when I try to explain supply and demand to women they look at me like I'm nuts...like I've got antennae sprouting out of my head.

This is so stupid. First of all women are not naturally socialists. Just as men, they believe what they believe, often by what they were raised as. This is sexist and absurd. Also, you mentioned something about how women should stop "throwing their kids into public school," however every single child in public schools all over America are about 10 times smarter than you.