The Curve of Binding Energy

The Curve of Binding Energy is the name of a book by John McPhee, that was assigned to me in a college journalism class. It was the first time I had heard about Project Orion. 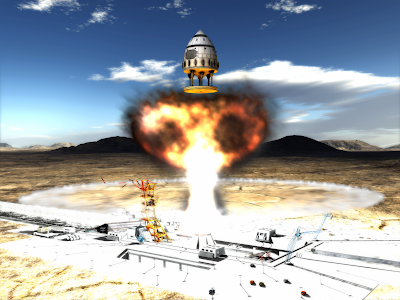 "Project Orion was a study of a spacecraft intended to be directly propelled by a series of explosions of atomic bombs behind the craft (nuclear pulse propulsion). Early versions of this vehicle were proposed to take off from the ground with significant associated nuclear fallout; later versions were presented for use only in space.

"A 1955 Los Alamos Laboratory document states (without offering references) that general proposals were first made by Stanislaw Ulam in 1946, and that preliminary calculations were made by F. Reines and Ulam in a Los Alamos memorandum dated 1947. The actual project, initiated in 1958, was led by Ted Taylor at General Atomics and physicist Freeman Dyson, who at Taylor's request took a year away from the Institute for Advanced Study in Princeton to work on the project.

"The Orion concept offered high thrust and high specific impulse, or propellant efficiency, at the same time. The unprecedented extreme power requirements for doing so would be met by nuclear explosions, of such power relative to the vehicle's mass as to be survived only by using external detonations without attempting to contain them in internal structures. As a qualitative comparison, traditional chemical rockets—such as the Saturn V that took the Apollo program to the Moon—produce high thrust with low specific impulse, whereas electric ion engines produce a small amount of thrust very efficiently. Orion would have offered performance greater than the most advanced conventional or nuclear rocket engines then under consideration. Supporters of Project Orion felt that it had potential for cheap interplanetary travel, but it lost political approval over concerns with fallout from its propulsion.

"The Partial Test Ban Treaty of 1963 is generally acknowledged to have ended the project. However, from Project Longshot to Project Daedalus, Mini-Mag Orion, and other proposals which reach engineering analysis at the level of considering thermal power dissipation, the principle of external nuclear pulse propulsion to maximize survivable power has remained common among serious concepts for interstellar flight without external power beaming and for very high-performance interplanetary flight. Such later proposals have tended to modify the basic principle by envisioning equipment driving detonation of much smaller fission or fusion pellets, although in contrast Project Orion's larger nuclear pulse units (nuclear bombs) were based on less speculative technology."


In other words, atomic bombs were dropped though a hole in the bottom of the craft, exploded, the explosion pressed against a pusher-plate, the craft went up, another was dropped, and so on (the Coke company was consulted on how to drop cans though a hole).

Weight was not a problem. Basically the material for entire cities could have been lofted into orbit.

There are several fictional representations of Project Orion, but the first one I read was Jerry Pournelle's King David's Spaceship.

I am convinced, beyond a shadow of a doubt, that we are at least 1,000 years behind where we should be.

Project Orion by George Dyson -Freeman Dysons son- is an an excellent read. Low yield,low fission product,directed energy "weapons" were the key. You can see the implications. It almost certainly would have worked IMO.

Try behind by 2 thousand years Bob.

Archimedes math was so far ahead, that if it had not been lost for 2K we might be living on Uranus by now.

Uranus is overrated, being the coldest planet in Solar System. Some moons of Jupiter and Saturn, on the other hand....