The Wisdom of Dogs 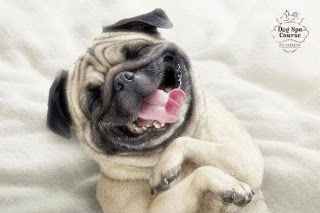 "The dog is the god of frolic" - Henry Ward Beecher

Dogs have abilities we don't, or perhaps more accurately, we have the same abilities, but in dogs they are vastly increased. We can smell, but it's almost nothing compared to a dog.

In sense we use them as organic machines, and have apparently for over 100,000 years. There is a saying, "Cooper's Law," that states, "All machines are amplifiers." They amplify abilities we already have, and dogs do the same.

It's well-known that many dogs are excellent - and instantaneous - judges of character. No one's quite sure how they do it.

For example, one guy, who later on turned out to be a trouble-maker nut, walked up to my car and asked for a cigarette. Before I could say no, my second pug, who was basically a comedic lovebug (as most pugs are) snarled and hurled himself over me, trying to get out the window to attack this guy. And this was an instantaneous judgement on his part. I thought the guy was just some bum looking for a cigarette, but he turned out to be a lot more than that.

That was my second pug.

The first was a runt of a pug named Norman, and he was an endless delight. In fact, I think that is one of the reasons we keep dogs: they are a source of endless amusement.

Norman wasn't very bright. I reckon, intelligence-wise, he was somewhere in-between a rock and a cabbage. But like nearly all pugs, he was a good-natured clown. He did such things as fall off of my lap into the trashcan and sleep on his back with his front paws sticking straight up in the air. He hopped back and forth like a rabbit, and often spun around, as if he thought something was sneaking up behind him.

I've read a dog's life described as eating, sleeping and playing, and when they're sleeping, they dream about eating and playing. That was Norman 's life. He lived the life that makes a dog happy, because he was expressing his dog nature to its fullest: eat, sleep, play, gnaw on rawhide bones all day.

Occasionally I wondered what he felt. Is he happy? He seems to be, very much so. Does he feel constant happiness? I am reminded of a poem by William Blake: "How do you know that every bird/That wings the airy way/Is in an enormous world of delight/Closed to your senses five?" Maybe that's true of a dog. Norman certainly seemed to be ecstatic when he attempted to untie my shoelaces by tugging at them with his teeth, or running in frenzied circles in the park.

Oliver Sacks once wrote of a physician friend of his, who somehow, had his sense of smell increased many fold, nearly, he suspected, to the extent of a dog's. He described it as astonishing, as being in an amazing world of smells that nearly overwhelmed him. He too used a poem to describe his experience: "The brave smell of a stone . . . the happy smell of water." He regretted it deeply when his sense of smell returned to that of a human's. Was that Norman 's life? I suspect it was.

It is from Norman, and other dogs before and after him, that I realized that humans, too, have to fulfill their natures to be happy. Dogs, less complex than humans, have a nature easily fulfilled. Humans aren't nearly as simple as dogs, but they too have to use their talents to be happy. They even need some of the things dogs need -- love and friends and community.

I tried to teach Norman in accordance with his dog nature. Dogs are very much herd animals, with a strict hierarchy. The top dog can tell every other dog what to do. Number two can tell everyone except number one; number three everyone but number one and two, and so on down the line to the last dog, who can't tell anyone anything.

I tried to teach him "sit," "stay," "down," and "come." Each one of these commands is based on the natural behaviors of a dog, which is why they work so well.

Such a life may sound awful to us, but it's what dogs want. Without it, they are unhappy; they're secure and happy when they know their place in the pack. So, Norman knew who's top dog, and he was happy.

Human education is supposed to be the same way: a teacher's job is to find a student's talents, and draw them out. Some people are born to be teachers, musicians, writers, businessmen. Sometimes their talent is so overwhelming they know what they're going to be when they've five. Most of us aren't so lucky.

And to make each student find some particular talents to develop to the maximum.

In Norman 's case, you could say, "to make a good dog and find his particular talents and develop them to the maximum." That made him happy. It's not hard. Such education helps make people happy, too. That's not hard, either.

I don't think human education in the government schools works very well anymore. It doesn't even work as well as dog education. That's what I've learned from raising dogs.

Human education didn't work very well when I was in school. I had twelve years of public schooling, excluding college, and I'm not exactly sure what I learned. Did schools find my, and the other student's talents, and develop them? No, they didn't. I suppose I had some talents, but the attempt to draw them out, such that they were, actually bored me. Sit, march between classes, sit, march. That's not conducive to an interesting education.

I don't blame this situation on the teachers. They're doing their best, but stuck in a system that doesn't work very well. Even private schools may not be much of an improvement, to the extent they copy government schools.

It's not too far off of the mark to say that I, and many other students, were slightly driven nuts by junior high and high school. One of the curious things I noticed is that drug and alcohol use was fairly prevalent in my high school (as it is in most) but it dropped off substantially once we graduated. One of my explanations, and it's the main one, is that we self-medicated against the sit-march-sit-march that all of us had to do for so many years. It's better to be drunk or stoned than bored.

One of my defenses was retreating into my imagination. I spent most of my junior high and high school years daydreaming. I have been, since I first noticed it when I was four, a bit more sensitive, intelligent, and imaginative than many people. I have found that such people, even though they are at times very extroverted, still need much time to themselves. That time is hard to find when you spend five days a week in school, then have homework. Which I didn't do, by the way.

My imagination was so vivid when younger I even had what are called hypnagognic hallucinations, which generally happen as you fall asleep (it starts with paralysis). Because I've had them, I know that alien abductions, and old tales about succubus and incubus, are just these hallucinations excessively extended. And I will tell you this: when they are pleasant, they are so far ahead of drug use it's not even close. It reminds me of that old saying, "We seek without the wonders that are within."

I suppose that imagination was (and is) one of my inborn talents. I never had any idea in school what to do with them. The schools didn't either. Indeed, they tried to eradicate the imagination - along with everyone else's - because I wasn't paying attention in class, and it showed in my grades. I graduated high school with a D+++ average. I wasn't even supposed to graduate, but had already been accepted to college.

One of the reasons I am for the free market and liberty (and I think this is rarely noticed) is that it is an antidote to boredom. It allows you to express your talents to the maximum, which is a component of happiness. And if you're happy, you're not bored. I'm sure one of the main complaints of people in socialist countries was boredom. Hard to believe, since socialism was supposed to allow people to maximize their talents, indeed make them into earthly gods.

Curiously, a lot of people would have "security," thinking you can have both it and freedom. They think the government can give them both, not realizing they're going to end up as regimented as bees in a hive. Or dogs in a pack. I don't see things their way, and history backs me up. We're not dogs, seeking an exact place in a hierarchy. We have to have liberty; it is good for us, indeed necessary for us, because it allows us to be the most, and the best, we can.

Look at the ancient, static societies of India and China , which for thousands of years produced . . . nothing. In such strictly hierarchical societies, people couldn't be what they wanted, and ended up more along the lines of dogs in a pack, than much more complex -- and free and happy -- human beings.

I do not believe it is necessary to go to school 12 years to be a high school graduate, another four to get a college degree, and another three or four to get a Ph.D. That's almost 20 years of schooling, and in some cases, more. That is just plain ridiculous, and hardly liberating. One of my friends, who is a podiatrist, admitted it would only take six months to teach everything he knew. I suspect it only takes six months to learn most everything. The rest is just a filter to remove students who can't put up with excruciating boredom. School today, from the beginning to the end, is obviously not the free market.

People like Thomas Jefferson, George Washington and Benjamin Franklin barely had any formal schooling at all, and in some cases, none. Yet look how they turned out. Where are the people like them these days? Gone, wiped out by government schools. Liberty produced such people. But not anymore.

It's a sad day when it takes raising puppies to realize what true education is. But then, that's real life as compared to academia. And as much as I liked Norman, I don't want his simple, hierarchical, herd life. I don't think most people do, either.

"It's well-known that many dogs are excellent - and instantaneous - judges of character. No one's quite sure how they do it."

I can't tell you how many times I've met dogs that "Hated other people/men," and had the owners look surprised and suspicious that their dog loved me.

It comes from living with a clean soul, brother.

Teachers are so a huge part of the problem in public schools. At least half are pooch screwing union slobs that regard children as chips in wage negotiations at best, and nuisances at worst.

The vast majority of them also come from the wrong side of the academic bell curve. The smarter kids go into the STEM fields, while the dummies take useless degrees or become teachers.

I have a brother in law and his wife - He a principal and she a teacher. Neither one of them are fit to teach anyone anything.

I will agree that there are exceptions to that - but they ARE the exceptions.