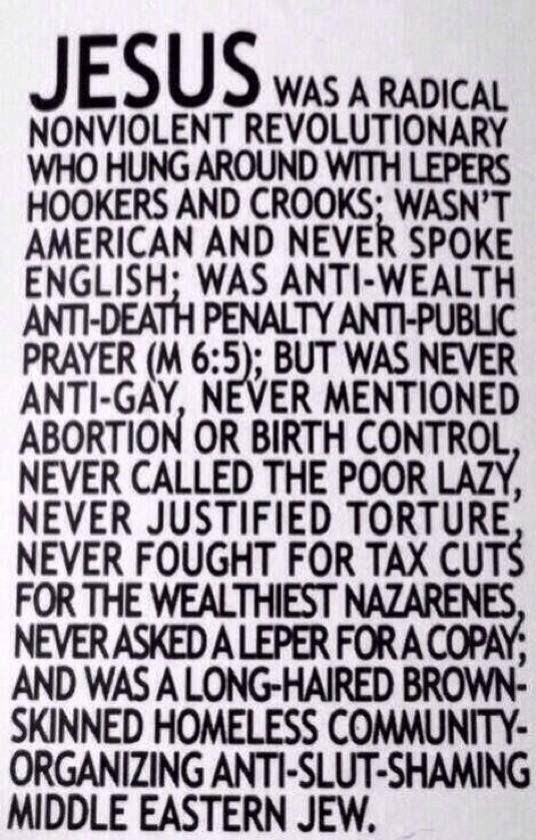 This has been making the rounds around the Internet recently. Of what's listed, only one thing is true - He was against public prayer. The rest is lies, distortions, exaggerations, or irrelevant.

Jesus is being portrayed as a leftist here.

How can someone do this? Because in order to successfully lie to others you first have to lie to yourself. Leftists are notorious about lying to themselves and others and not having any honor. They also think anyone who disagrees with them isn't merely mistaken - they think they're evil.

Of course, some people think this is a wonderful list. They live in a world of delusion.

I once read a long article about how Jesus was a libertarian. It made a lot more sense than this list. I have a book called The Humor of Christ, which convinced me He was very witty but had a pretty mean sense of humor and would have been a bear to deal with. A leftist? Meek and mild? I don't think so.

Leftists hate religion. This list is an attempt to make Jesus a leftist and therefore destroy everything He stands for.

If you look at the history of Christianity a lot of the strife and murder were caused by leftists. Whenever you read of some dead cult whose leaders were beheaded they were almost always left-wing.

All the lefties did was put all their lies on one convenient list. I suppose they think it adds relevance and validity to their dogma and ideology.

It started back in the 70's when it suited the blacks to portray Jesus as a negro. Then the queers and social justice warriors piled on to claim that He was a woman, a faggot, and a commie too.

I'm not religious. I'm a father, a husband, and a man who wants to do right by people if he can. I further believe that much of Scripture got written the way it did based on historical social events of the past that either failed or succeeded.

I will not be told what to say or think by holy rolling bible thumpers - and nor will I tolerate the endless sanctimonious babbling, hectoring and blaspheming stupidity of the greasy elderly baby booming hippies, butt blasting faggots and pedos, and sexually disturbed feminists.

Just from a psychological standpoint, it makes no sense (that list). When a man takes a beating, such as the account of the entire crucifixion story in the gospels, keeps his mouth shut, then proceeds to ask for explicit forgiveness for the people torturing and killing him, this is an act of sheer will.

Passive, weak men do not express such willpower. They whine, lash out and have tantrums. If Jesus were so passive as the list, that whole story would have read a lot different.

Nobody loves a passive god. They just use such a god for their own ends, much like they use passive people.

"We have all heard people say a hundred times over, for they seem never to tire of saying it, that the Jesus of the New Testament is indeed a most merciful and humane lover of humanity, but that the Church has bidden this human character in repellent dogmas and stiffened it with ecclesiastical terrors till it has taken on an inhuman character. This is, I venture to repeat, very nearly the reverse of the truth. The truth is that it is the image of Christ in the churches that is almost entirely mild and merciful. It is the image of Christ in the Gospels that is a good many other things as well. The figure in the Gospels does indeed utter in words of almost heartbreaking beauty his pity for our broken hearts. But they are very far from being the only sort of words that he utters. Nevertheless they are almost the only kind of words that the Church in its popular imagery ever represents him as uttering. That popular imagery is inspired by a perfectly sound popular instinct. The mass of the poor are broken, and the mass of the people are poor, and for the mass of mankind the main thing is to carry the conviction of the incredible compassion of God. But nobody with his eyes open can doubt that it is chiefly this idea of compassion that the popular machinery of the Church does seek to carry. The popular imagery carries a great deal to excess the sentiment of 'Gentle Jesus, meek and mild.' It is the first thing that the outsider feels and criticizes in a Pieta or a shrine of the Sacred Heart.

As I say, while the art may be insufficient, I am not sure that the instinct is unsound. In any case there is something appalling, something at makes the blood run cold, in the idea of having a statue Christ in wrath. There is something insupportable even to imagination in the idea of turning the corner of a street coming out into the spaces of a market-place, to meet petrifying petrifaction of that figure as it turned upon a generation of vipers, or that face as it looked at the face of a hypocrite. The Church can reasonably be justified therefore if she turns the most merciful face or aspect towards men; it is certainly the most merciful aspect that she does turn. And the point is here that it is very much more specially and exclusively merciful than any impression that could that could be formed by a man merely reading the New Testament for the first time. A man simply taking the words of the story as they stand would form quite another impression; an impression full of mystery and possibly of inconsistency; but certainly not merely an impression of mildness. It would be intensely interesting; but part of the interest would consist in its leaving a good deal to be guessed at or explained. It is full of sudden gestures evidently significant except that we hardly know what they signify; of enigmatic silences; of ironical replies. The outbreaks of wrath, like storms above our atmosphere, do not seem to break out exactly where we should expect them, but to follow some higher weather-chart of their own."