A War on Everything 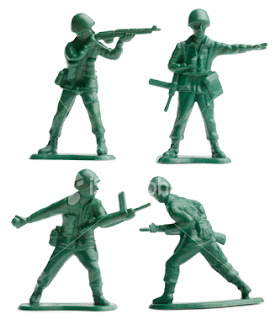 I the incessant, wearying and destructive wars � "the War on Drugs," or "the War on Poverty," or whatever "the war" de jour happens to be.

But the word "war" is almost always used. And all these "wars" involve the coercion of the State, rather than the liberty and creativity of the free market. Isn't that what "war" means � the destructive involvement of the State? I never hear General Motors talk about "the war on Ford," as if two armies of workers would actually battle it out on a field somewhere, with mortars and machine-guns, over whether a Crown Victoria or a Caprice is the better car.

Let's assume, for the sake of illustration, that both sayings in the first paragraph are true, that they are Natural Law. This means any kind of "war" that involves the coercion of the State will never work and instead always destroy, whereas on the other hand anything that involves liberty and the free market will work because it creates. It's the difference between the Political Means of the State -- theft, coercion and destruction -- and the Economic Means of Society -- liberty, creation and the free market.

Does the free market work perfectly? No, it doesn't. I know that. But the worst it works is a quantum leap so far above the best the State can do that the State can only be considered a danger to everything in which it gets involved.

Take the "war" on drugs as an example. The costs exceed the benefits, and always will. It's an attempt to change people from the outside in, through threats, violence, prison, destruction and death, in the manner of A Clockwork Orange. People only truly change from the inside out, when they change their hearts and minds. You can't permanently change anyone's mind for the better by beating them. If you can change it at all, it's always for the worse.

Making drugs illegal led to organized crime and a multi-billion-dollar black market that is funding terrorism against us. It has caused drugs to become smaller, more concentrated and more powerful, so they'll be easier to smuggle. It has put hundreds of thousands of people in prison for non-violent drug offenses. It has caused crime to go up, as users attempt to obtain the money for a fix. Those are some, but not all, of the results of the State's "war" on drugs.

Now imagine if we made "peace" on drugs, if they were legal. Organized crime involved with drug smuggling would disappear overnight, as would the smuggling itself. The concentrated drugs would still be around, thanks to the State. Once users have had a taste of crack, most aren't going to go back to chewing coca leaves. But at least they wouldn't be mugging people and burglarizing their houses to get the money for a fix. Crime would go down. The prisons would be half-empty. Those are some of the results of a "peace" on drugs.

Legalizing drugs wouldn't be perfect, because of imperfect human nature, but if they were legal, in just a few weeks the public would wonder why it hadn't been done decades before.

How about the "war on poverty"? It involves giving money to "poor" people. It hasn't done much good, because most of the poor have lousy characters. That's why they're poor. You could give them a million dollars, and most of them would again be poor a year later.

What the "war on poverty" has done is help break up families � or else prevent them from forming. Young unmarried women on welfare start having babies in their teens and are grandmothers by the time they are in their 30's. Boys in their teens, raised without fathers, form gangs and murder not only each other, but innocent bystanders. Those are some of the results of the "war" on poverty� generation after generation of the sins of the fathers being visited on the sons.

And if the State ceased its "war" on poverty? Without people choosing to live on welfare � because it wouldn't be there � illegitimacy would go down, as would the amount of predatory gangs and the murder rate. It's what happened in the recent past. It'll happen in the future, if we make "peace" on poverty and get the State out of the attempt to eradicate it.

For all practical purposes, every time the State touches something, it makes war on it, even if it means to make things better. The "war" on discrimination through affirmative action? It has instead set black against white, women against men, gay against straight, as each tries to use the political process to obtain power over the others. The road to Hell, obviously, is paved with good intentions.

When the personal becomes the political, you can be sure war is to follow. Making something political that should have never been political will always set people against each other. It sure won't make them get along. Instead, it makes war. Thus it always will be. It's liberty and the free market that allows people to get along, not the misguided interference of the State.