I am the Sorcerer, or, Every Picture Tells a Story

"The purpose of art is to inform and delight." - Milton Glaser


I'm sure that when I was little I had looked at playing cards many times, but there came a day when I realized on those cards were pictures of a King, a Queen and a Jack. I remember thinking these cards must be very old to show such things. If the Jack represented the Prince, where was the Princess? And what was the Joker doing there?

Years later I found playing cards evolved from Tarot cards, which themselves were game cards, although they were (and are) used as a supposed oracle. (Personally, I see them more along the lines of psychological tests, such as the Rorschach and Thematic Apperception Test: how you interpret them tells you about yourself.)

Then I found that both Carl Jung and Joseph Campbell, those of such importance in mythological studies, had both been intrigued by Tarot cards and studied them. That puzzled me even further.

Then I found out why. What mattered to them were the pictures on the cards, which are archetypes. The cards are art that tell stories - as all art does. (In fact, when I first saw the cards, I thought, "These are archetypes," although only a few made sense to me. The Magician did not.)

For those who claim the cards have certain exact meanings, I remind them the root word of "education" is to "bring out." The art on the cards was originally meant to educate. The meaning of art on the cards is what I bring out of it.

Here is the Magician: 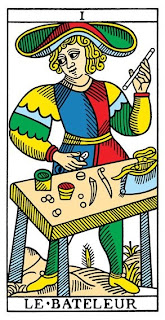 The articles on his table represent the social classes of that time: the Swords signify the nobility; the Cups, suggesting the chalice of the Catholic Mass, are for the clergy; the Coins, for the merchants, or "third estate", the townsmen, the burghers; while the Staves, Clubs, or Batons, stand for the "churls," the peasantry and servants.

These classes have been noticed in other cultures. In Indian philosophy there are the Priests/Intellectuals, the Warriors, the Merchants, and what you might call the Churls. Paul Fussell once wrote a book called Class, in which he analyzed the classes in America.

The Batons later turned into wands, which for those who wield them in fiction can be used for good or bad.

The Baton the Magician holds in his hand represents the stupid "churls," the lower-class violent ones who today become police officers or go into the military. That picture is telling us Magicians use the force of the police or military to subjugate the other classes.

To be specific about it, there are the Good Magicians and the Sorcerers. The Sorcerers are the one who use the "churls" to enforce their slavery on the other classes.

These days Sorcerers are called politicians.

They also use "spells," which essentially means to talk, or, today, to use propaganda. Those two things are the extent of the Sorcerer's power: the threat of violence from the police/military, and propaganda. Force and Fraud. That's it.

Dante, in his Inferno, well understood the concepts of Force and Fraud. He reserved the lower depths of Hell for those who perpetrated Fraud, which he thought was far worse than Force, because Fraud almost always came before Force.

We are today ruled by Sorcerers, who use Fraud and Force (propaganda and the police/military) in their attempts to enslave us.

Unfortunately, there are many people today who actually see the Fraud and Force of Sorcerers as a good thing, mostly because they don't think it will be applied to them. But it will.

Why are Sorcerers like this? Why else? The intoxication of power. Power, domination, control. Power intoxicates - and immunity corrupts. As Dostoevsky put it in The House of the Dead, "Tyranny...finally develops into a disease. The habit can...coarsen the very best man to the level of a beast. Blood and power intoxicate...the return to human dignity, to repentance, to regeneration, becomes almost impossible." Like the Emperor in Star Wars and Lord Voldemort in Harry Potter.

The media is the propaganda arm of the Sorcerers, which is why I don't read newspaper or watch TV and listen to the news on the radio. It's best to stay away from those trying to cast spells on you.

How did these problems today come about? Mostly because of democracy. Under it, the churls, the lower classes, can vote themselves other people's money. And they are the ones the Sorcerers use to enforce violence.

As for the other classes, shame on them for their complacency and falling for propaganda.

People in the past were as smart as we are and in some cases smarter, because their brains weren't stuffed with college nonsense. They probably knew more about human nature than we do. The idea we have discovered something "new" about people is the depth of ignorance and arrogance.

Of course, the end result of the Sorcerer's Fraud and Force is some sort of collapse. How can it be any other way? Those who lust for political power always destroy. It's always happened in the past, without exception.

There is, of course, a card signifying Chaos and Destruction. It is related to the Devil, or mythologically the Terrible Father, such as Darth Vader. 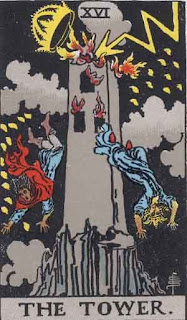 "You and I have need of the strongest spell that can be found to wake us from the evil enchantment of worldliness." -C.S. Lewis

Thanks for the education on the history of playing cards. As in all simple things, deep meaning resides at the center and origin.

We are in Chapter 1 of the Foundation trilogy. Hari Seldon sees the end of empire fast approaching, even though on the surface it looks as powerful as it has ever been.

The only question is this: how long will the next Dark Age last?

If we had an intelligent education system this is the kind of thing I could have learnt about at school.